When Ian Bundy-Weiss (OAK5 Hidden Genius Alum) joined our program, he quickly discovered there was more to The Hidden Genius Project than just learning how to code, and how to be an entrepreneur or a leader. Besides connecting with his roots as a Black and Jewish man in our leadership sessions, Ian found his love for teaching computer science to his peers in his cohort, which ultimately led him to become a Youth Educator supporting our Catalyst programming. As Ian prepares to close out his second year at California State University Long Beach as a Computer Science major this spring, we sat down with him to learn how The Hidden Genius Project has inspired him to pursue a career in the IT field. 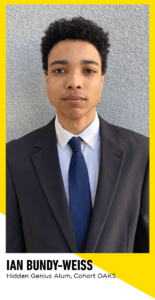 My mom told me about this program and I later found out some of my friends in high school like Desmond Pare [OAK3 Hidden Genius Alum], Malachi Poole and Kyron Loggins [OAK4 Hidden Genius Alumni] were already in it. I was always interested in being in tech and my friends told me how impactful the program was. They shared how it helped them learn and grow as a leader, entrepreneur, and programmer.

My experience throughout The Hidden Genius Project was amazing. I enjoyed being able to learn about technology while being in an environment that was welcoming and structured.

My first summer in the program was super fun because my brothers and I were learning about the basics of technology and entrepreneurship for the first time together. Everyone was on the same page and it made the program atmosphere more unified, especially since we all Black men. I’m used to diverse classes in school, but this was my first experience being in a room with all Black males, which was powerful.

I really connected with Ndene Diallo [OAK5 Hidden Genius Alum] in my cohort since we both liked playing video games during programming and we were both two of the strongest coders in our class. We would often have friendly competitions on who could write or debug their code the fastest. Overall, we both love coding and app design which is why we both work well together as Youth Educators

Also, one of the best parts of the program was being able to visit different tech companies for business trips and seeing how they work and operate behind the scenes. Autodesk and CBSi were my favorite trips because they really gave us a chance to experience what a day in their company was like.

Autodesk put together a really cool two-day 3-D workshop where we had the chance to design our own robots using their software and print them using a 3D printer. Then we were able to hook up and program LEDs to our robots all while being able to roam their gallery. When we went to CBSi, they set up different stations for us to see various aspects of their businesses from cooking food in their kitchen studio to protecting their company from cybersecurity threats using a game simulator. It was really interesting and cool to see how many things they are involved in using technology.

Overall, The Hidden Genius Project has heightened my qualities around coding, academics, social, and leadership skills.

I knew I had to create an app in my second summer for my final tech project, so this encouraged me to get ahead on my app project, HypeChat, as I really wanted to create something new and exciting.

In the beginning, HypeChat was both a social media platform and marketplace for clothing/shoe enthusiasts to share their love and ideas in the streetwear industry. It was kind of a mix between Instagram and eBay as they could also sell their attire and shoes. I knew it was a big coding project but I was set on making it happen.

Unfortunately, I ran into several coding challenges for the first few weeks during my second summer where I was stuck on errors and debugging my app in Xcode and Swift. Every time I made progress, I would run into a whole new set of issues and errors. Before I knew it the summer was almost over and my project was not even close to being finished.

I decided to change my app from being a social media marketplace tool to a chat app with the same idea of connecting people in the fashion community. This final project taught me how to not bite off more than I can chew. I still was able to finish my app project two to three weeks before the deadline so Hodari [Director of Curriculum and Instruction] gave me the opportunity to help my brothers finish their app projects. I was helping them build, design, and debug their apps over the next few weeks. At that moment, this program made me realize that I liked teaching people about technology and programming.

It’s easy to say that my computer science and programming skills have been the most beneficial for me, especially since it’s my major in college. I’m literally coding every day in college and it’s been helpful to have gained this experience and skill early on with The Hidden Genius Project.

Since I love helping people learn how to code, The Hidden Genius Project gave me the opportunity to become a Youth Educator which allowed me to build my skills as a mentor. I learned how to create lesson plans, facilitate a class, and connect and motivate students as an instructor.

During the program, we were always encouraged to act and dress professionally on business trips to tech companies. Our mentors would constantly tell my brothers and me, “know how to carry yourselves.” And I always did, but this role as a Youth Educator really pushed me to be even more professional, both in the classroom with students and the partners we were working with.

Honestly, I feel as if I found myself as a Black man being a part of The Hidden Genius Project. Growing up in the suburbs of Vallejo, in a mostly white and Filipino neighborhood, I never had a group of Black friends that I could rely on and confide in.

I didn’t grow up with a full Black culture and community, as I’m part Black and Jewish, so this ultimately was my first real experience being surrounded by Black men, being mentored by Black men, and learning with Black men, which really helped me find myself of who I am as a Black man. The Hidden Genius Project helped me connect with my Black roots and ancestry on a deeper level through the leadership lessons and group discussions with my brothers in the cohort. Because of these learned experiences, I feel whole and complete.

Instead of majoring in computer science at California State University Long Beach, I’d be pursuing a degree in business. Despite both my parents’ backgrounds in technology and IT, I was more interested in the business side of the world compared to computer science.

Today I know for a fact that computer science was the best major for me because of my passion for technology and all of the programming skills I’ve developed. I truly credit The Hidden Genius Project for putting me on this path as they provided the necessary tools, resources, and opportunities that helped me thrive in this field.

I’d say the biggest difference for me is that I have definitely matured and grown since completing the program. After being exposed to various careers because of The Hidden Genius Project, I can confidently say that I am more dedicated and focused on what I want to accomplish and who I want to become in life.

Before I joined the program during my sophomore year, the old me was on autopilot and just going through the motions in high school. I wasn’t as motivated or driven as I should have been. When I got accepted into the program, everything changed. I didn’t realize there was so much more to life; The Hidden Genius Project provided me with the resources to help me explore possible career paths. Now I’m set on pursuing a career in the IT (information technology) Management field with a focus on software design and development.

I have been working with The Hidden Genius Project as a Youth Educator ever since I completed the program in the summer of 2018. Right when I graduated from the program, I knew I wanted to become a Youth Educator and give back all of the skills I learned in The Hidden Genius Project to the community. I have led several HTML and UI/UX Flutter design workshops for kids in middle and high school at Brothers Code and Bridge Housing. This past year I taught web design workshops with youth in South Los Angeles at SoLa I Can Foundation with Cameron Leonard [RICH1 Hidden Genius Alum].

I have so much fun teaching code and it feels good. Every time I see one of our students having fun learning how to program it reminds me of how I first felt when I learned about computer science. I find it so rewarding to see their joy when it comes to learning about technology.

I’d tell myself to take advantage of my time in the program and if things get difficult to just keep pushing through it as it will be worth it in the long run.

As you go through the program, explore as many things as possible to find something that inspires you, whether it’s in technology, entrepreneurship, or leadership. The Hidden Genius Project provides so many resources, opportunities, and mentors with various backgrounds that can help you find a field or pathway that you’re passionate about.

Since 2012, more than 7,000 students have revealed their genius through our
Intensive Immersion and Catalyst Programs, and so many more are waiting to shine.