Desmond Paré recognizes the power of being a part of something bigger than himself. He’s been playing saxophone since the age of 10, with plenty of 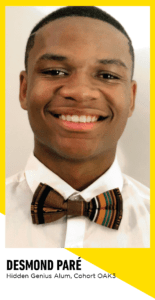 opportunities to take the spotlight as a soloist; still, he prefers the big band arrangements – taking on complicated compositions with the force of a full ensemble.

He notes that the 15 months he spent in The Hidden Genius Project’s Intensive Immersion Program was when he really learned to shine as a leader. “When I came in I was not a strong leader. I had the energy, but I didn’t know how to channel it. They taught me where to channel all my energy, in the right way.”

His ability and commitment to lead and give voice to those around him now flows freely through other facets of his life. For the last two summers, Desmond has served as a Youth Educator through The Hidden Genius Project, teaching coding to students at Head Royce as part of their Head’s Up Summer Program. He leads a Computer Technology and Web Development class for about 20 middle school-aged students. “I went from having zero knowledge of coding and computer science to now teaching it to kids,” Desmond says, speaking about his experience from before The Hidden Genius Project to today. “The journey from Glover Center [where the Intensive Immersion Program is hosted] not knowing anything, to now returning and teaching…it’s just amazing.”

After two summers of fine-tuning his skills in front of the classroom, Desmond was afforded the opportunity to teach students in London as part of The Hidden Genius Project’s Tech Slam Catalyst program. “At first I was like, ‘no way!’” said Desmond, “but of course I immediately said yes, I mean, obviously. It was kinda too good to be true.” As the school year began Desmond says he forgot all about the trip. “It wasn’t until I started receiving emails about ‘London logistics’ that it hit me — and it was real,” he reflected. The preparation to take his lesson overseas was intense. “There were so many workshops that we had to prepare for — grinding lesson plans getting it together for the trip. All pumped, like, yeah, this is really happening.”

And it really did happen. Desmond led workshops about microcomputers and the basics of computer science to more than 200 students of color in the UK. Beyond technology, a key takeaway was the connection made among him and the students. “In the end they all wanted to take snaps of me and called me their American brother,” says Desmond. “Being able to bond with them within an hour – that’s The Hidden Genius Project. No matter where we go, there’s always just a brotherhood. You don’t have to say it, you just know it. You feel it.”

With acceptance letters in-hand from Arizona State, Prairie View A&M, Fisk University, and more on the way, Desmond heads to college in the fall, and plans to major in Computer Science. Before he goes, he will return to Head Royce for his third summer of teaching.

Desmond offers the following words for those considering joining The Hidden Genius Project: “Enroll. It’s life-changing.” he says. “It’s amazing to look at all the new brothers that are just getting started. I see a whole bunch of brothers that were kinda like me when I joined. What’s amazing is the fact that I can see where they’re headed—they have so much potential and they have no idea what’s coming—that their life is about to change in a great way.”

Since 2012, more than 4,200 students have revealed their genius through our
Intensive Immersion and Catalyst Programs, and so many more are waiting to shine.