By The Hidden Genius ProjectJune 26, 2019No Comments 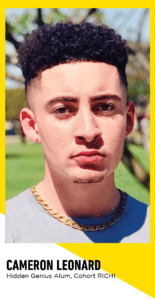 Cohort. Younger Geniuses in the program looked up to him, and he felt a close connection with the Hidden Genius Alum Youth Educators – some of whom were his age. It was “perfect timing” for him, he says. “If I had started earlier I don’t know if I would have taken it as seriously. It helped me decide what I wanted to do with my future.”

Still, he notes, it was a tough decision for him to join The Hidden Genius Project, as he had to decide between being on the Varsity Basketball team of his high school, or committing to the 15-month program. “I was splitting my time between work and school and basketball. My mom told me I had to make a decision. I had to give up the last year of varsity basketball to keep with The Hidden Genius Project.” That decision, he says, changed everything for him. “I was heartbroken [at first], but after seeing what it did for me I felt totally happy.

With an expanding set of skills and access to innovative tools, Cameron says he found a new passion in music. “Before I had a laptop, I didn’t have any way to download tons of music. After I got a laptop, I was able to buy apps and create my own beats. I ended up growing a huge passion for music, creating music, and mixing that with technology.” His dream job is to become a music producer. “I want to do everything I can possibly do with music technology – direct videos, produce, make music, have own record label, sign artists myself.”

Now 19 years old and a Digital Media Arts major at California State Dominguez Hills, Cameron is spending his summer supporting the next wave of Geniuses, as a Hidden Genius Alum Youth Educator. In addition to helping them in the classroom, he has joined them on business trips to various tech companies – some of the same spaces he had a chance to visit when he was in their shoes just 15 months ago. Reflecting on the lasting impression the experience made on him, Cameron says “it was really inspiring to be able to walk into a business as big as Facebook or Google. Those companies just welcomed us week after week. They helped us out and we were able to make new connections.” His favorite trip was to Electronic Arts in Redwood City. “I grew up playing EA games. Being able to go to EA and see where they’re all made…that changed everything for me. The whole campus, everything–seeing all the different designers, talking about their experiences and walking through the buildings with thousands of pictures and awards. I’ve played a lot of their games, and being able to meet the people that make them–it was just the perfect place for me at the time.”

For his next big step, Cameron says he’s focused on graduating college, “trying to consistently become a better person every day, get better at music, becoming a better leader and helping out the kids.” With his return to the program as a Youth Educator, he says “It feels good to give back, knowing I‘m helping out the youth and knowing I need to be a good example to them. Now I can help a kid out, and then he can help a kid out. It makes me happy.”