When Kyron Loggins spoke into the mic at The Hidden Genius Project’s recent End of Summer Celebration, he quickly made note of his own voice. “Wow, I sound deeper now,” he said in his newly-minted baritone. 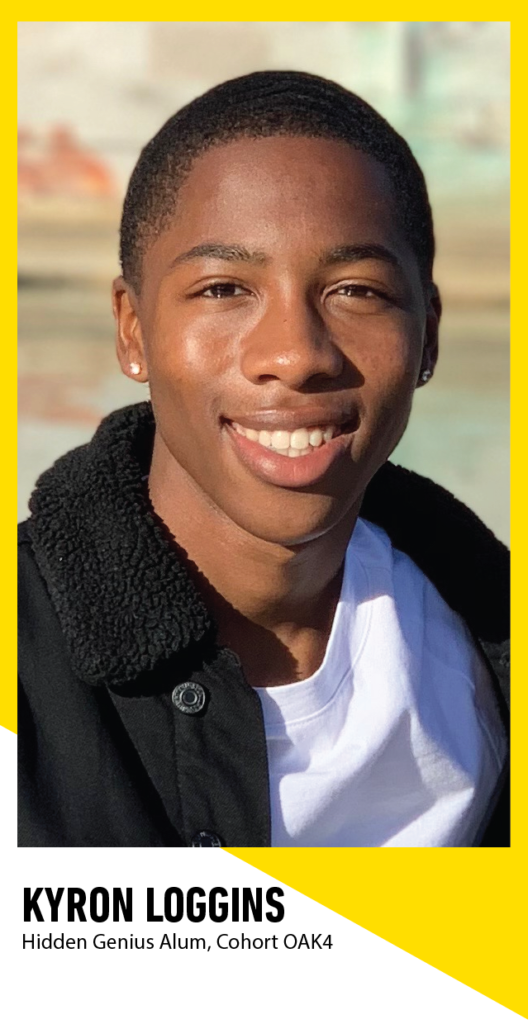 If you’ve watched our original promo video [HERE], Kyron is the Hidden Genius with the distinct cracking voice in the opening scene who shares his insight: “Young men of color as a whole, you’re told that ‘oh you’re going to be a great athlete, oh you’re going to be a great artist or a great rapper.” He points out that there’s less messaging encouraging young men of color  to be great technicians or engineers, and says, “if you’re not exposed to something, how can you aspire to be a part of it?”

Now 16 years old, it’s clear to see – and hear – that Kyron has grown in tandem with our program over the years. His commitment to The Hidden Genius Project, much like his voice, is decidedly deeper and more confident than it was just a few years ago.

“[Joining The Hidden Genius Project] was completely out of my interest,” Kyron says. “I went in with a very closed mind.” But shortly after getting involved, at the urging of his mom, the resistance Kyron was carrying quickly melted away, thanks to the program’s unique structure, dynamic staff, and identity-based approach. “It really kind of awakened me and opened up my eyes to how business works and how the world works. I feel a lot more informed and a lot better prepared, not only as a person, but also as a Black man.”

Identity politics get plenty of airtime in our modern context, but hearing from a young Black man the ways that The Hidden Genius Project’s decided emphasis on identity has served to expand his mind and future is more powerful than any study you could read. Kyron offers a clear critique of how often “good” is implicitly translated into “white” when it comes to seeking opportunities for youth of color to grow and advance. “It basically translates to you being spoken to by white people all day,” he says, “and at the end of the day, you’re not connecting to it in the same way because, for all that they can teach you, nobody can teach you what it’s like to walk in your shoes except for somebody who knows where you want to go and has traveled that same path.” Kyron acknowledges and believes in the importance of diversifying your network and having mentors of all different backgrounds, but also knows the power of being able to identify with the positive examples before him.

Kyron recently participated in The Hidden Genius Project’s first international trip to London, where he played an integral part of the youth education team and had the chance to share his passion through teaching other youth. “It’s transformative for other younger people to hear youth talk about how they’ve applied this to their own real lives and how it’s working for them.”

Taking part in the trip also deepened learning Kyron has gained from past travel experiences. “It was a really great example of cultural exchange,” he reflects. “It reminds me of when I went to Ghana, and I expected the kids to be so different, but they’re just so similar. It’s almost like finding home in a different country because you’re around all these people who could come from the same place you come from. Even across seas, we have the same experiences.”

An additional takeaway Kyron gained from the trip to London was a sense of perspective and pride about the trajectory of The Hidden Genius Project since he first got involved. “I started the program when there was no Richmond cohort, no international trips, or even out-of-state trips yet. Coming from student to alumni to employee, it’s just great to be able to visually and mentally experience this growing and scaling because it’s such a positive thing for the community of Black people everywhere.”

Perhaps Kyron’s answer to the question of how he’s stayed connected to the program since graduating from the Intensive Immersion Program is most revealing of the impression The Hidden Genius Project leaves on Genius Alum: “I never finished,” he says. “I’m still here. I never felt like there was any disconnect.”

Now a senior at Bishop O’Dowd High School, Kyron hopes to enroll at UCLA and major in business and marketing with a minor in computer science. The Hidden Genius Project has helped him both to understand technology as a tool for problem-solving and also to see the value in becoming a business owner, in service of creating better conditions and opportunities and having a positive impact on social change. “I want to be able to create spaces for people like me—maybe it doesn’t fit them to be the next Mark Zuckerberg. I want people to be able to feel like they can be the next them, and if I can be not only an example but a helping hand to that, then I’ll feel like I’ve made a better change in my community.”