By The Hidden Genius ProjectAugust 31, 2021No Comments

From an early age, Khalil Jackson, Richmond Cohort 1 (RICH1) knew he wanted to be his own boss. But before joining The Hidden Genius Project he says he was just “going with the flow of life and school.” After participating in an entrepreneurship session in the program, Khalil became inspired once he learned “how money and a growth mindset can help me get paid for things I like to do and enjoy.”  Now 18 years old, Khalil is excited to begin his freshman year at Recording Connection, pursuing his dream of becoming an audio engineer and entrepreneur in the music industry.

How have you been? 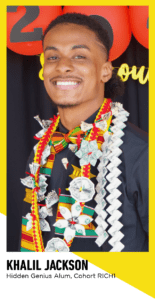 I’ve been good since graduating from De Anza High School this past spring. Now I’ve just been busy with work and trying to get my driver’s license while starting my first year at Recording Connection [an industry-recognized school designed to train you for a career as an audio engineer, music producer, live music engineer, DJ, or beat maker]. I’m studying what I love and enjoying it as I’m learning something new every day. My family has been good too. I appreciate my time with them more now because of the pandemic. It’s a blessing to be healthy and I’m just trying to handle my business through it all.

My mom told me about The Hidden Genius Project and how they were based out of Oakland but were opening a new location in Richmond at the RYSE Youth Center. It was super close to my house so my mom made me apply to the program. After getting accepted into the program, I got excited about all of the skills they could teach me, especially about entrepreneurship and leadership.

One of my favorite parts about the program was the brotherhood and mentors I gained in Richmond. Even though programming was three years ago we are still tight and close. I really enjoyed going on business trips to learn something new and to see how Google, Apple, Electronic Arts, and other technology companies supported their employees—especially for people who look like me.

Leadership and entrepreneurship were the areas I was most interested in when I first applied because I knew these things were important. Back then, Landon [former Innovation Educator] was teaching leadership lessons and he would always encourage us to do something we love while finding a way to give back to our communities. Also, entrepreneurship really opened my eyes to how money and a growth mindset can help me get paid for things I like to do and enjoy. I always wanted to be my own boss so I was always all ears and soaking up the information during every entrepreneurship session.

Describe the app you designed during your time in the Intensive Immersion Program.

I designed an app called Second Chance, which is a platform to help people who were formerly incarcerated find a job. It’s crazy when I came up with this app idea because I had no clue what I wanted to create and all of my brothers were already set on their ideas. My dad was incarcerated and he called me one day telling me how difficult it is for ex-felons to find a solid job to live off of.

The government really got them messed up with making it difficult for incarcerated people, especially people of color to re-enter society so I wanted to create a solution to help people like my dad. Ideally, the app was going to feature a map that listed jobs from different areas people could apply for and help them get back on their feet. The toughest part for me with creating this app is the coding aspect, but it was cool to take an idea out of my head and turn it into a reality. I felt so relieved after finishing my tech project and I thank David [Richmond Site Coordinator and Innovation Educator] for helping me with it.

I haven’t been in too many other programs, but what I can tell you is none of them were nearly as effective as The Hidden Genius Project. They always helped make sure I was stable mentally and helped me figure out my personal goals. David would take me home sometimes whenever I didn’t have a ride or needed a ride to get to programming. When it came to computer science, he would always be willing to help me one-on-one whenever I got stuck on a coding assignment. To be honest David and The Hidden Genius Project have always looked out for me to see how I’m doing and they still do it to this day even though it’s been four years since completing the program.

The top skills I learned in the program are how to be a leader, communicator, and entrepreneur. The Hidden Genius Project helped me become a better leader because my fellow brothers would treat each other with respect and vibing in a way with love. Anytime somebody would be wildin’ out, which was usually the younger Geniuses, I saw my brothers checking them in the classroom to behave and I liked how they did it. Watching them encouraged me to step up and be a vocal leader in my cohort as time passed.

One of the other skills that has greatly helped me is understanding how to be empathetic and compassionate towards other people. Before The Hidden Genius Project, I didn’t care about other people’s feelings unless they gave me a solid reason to. During the leadership lessons, our cohort would share their personal experiences and challenges with one another, especially with current events. In these moments I understood what being compassionate was all about. I truly felt what my brothers were going through as they shared their stories and talked about the trauma they’ve experienced.

The most important thing I gained from being a part of The Hidden Genius Project is the personal relationships with the staff. They have helped and inspired me in so many ways during my time in the program and after. Everyone showed me a whole new world with technology and business that I didn’t even know about and it made me think differently. I learned how to improve my thinking and put myself in a better position to succeed in life. Plus, everyone has encouraged me to follow my passions, and every day I tell myself to “You have to dream big to live large,” and that’s exactly what I plan on doing.

I was 14 years old when I first joined The Hidden Genius Project and I didn’t know who I was or what I wanted to do in life. I would honestly just go with the flow of life and school. After completing the program and graduating from high school at 18 years old, I now have goals set that I plan on achieving as I really want a career in the music industry and being my own boss. I’m excited to do whatever I can to achieve those goals.

In what ways has the staff of The Hidden Genius Project continued to support you since graduating from the program?

Two months ago Sean Valentine reached out to me about a job opportunity with The Hidden Genius Project to support Zebreon Wallace, Oakland Cohort 2 (OAK2) Hidden Genius Alum, and Youth Educator with alumni outreach because there are so many Hidden Genius Alumni now. My responsibilities are to reach out to Geniuses and have them complete check-in surveys. I’ve enjoyed connecting with past alumni and building strong relationships with them. I can hear in their voice how much it means to them when I call them and it leaves them feeling good knowing that The Hidden Genius Project cares about them.

I have nothing bad to say about The Hidden Genius Project as they have been very helpful for me as a Black man. I would tell myself to apply again for sure as they have supported me in numerous ways.

Just apply because you will not only gain a large number of brothers with whom you will build incredible bonds and relationships with, but also receive a laptop and stipends. Plus, you’ll learn a lot about business and entrepreneurship.

Since 2012, more than 7,600 students have revealed their genius through our Immersion, Catalyst, and Community Partner Programs, and so many more are waiting to shine.