For many young people, the journey through high school and on to the next phase in their life can be a roller coaster full of unexpected twists and turns. 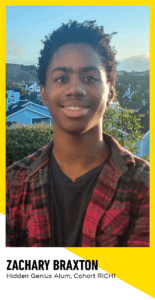 RICH1 Hidden Genius Alum Zachary Braxton’s own experience has certainly provided enough loops to catch even the most prepared student off guard. Through it all, he has not only learned how to lean into the turns, he’s also found a way to lay the tracks of his very own design, figuratively, of course – but also literally through an internship at Autodesk.

Right from the start he appreciated the Intensive Immersion Program’s approach, noting how different it was from what he had experienced in school. “You were able to be real with The Hidden Genius Project mentors,” says Zachary. “If something was up, the fact that you were being listened to was a huge difference than school. Sometimes my teachers’ egos get in the way of listening. They would be like ‘if you have a problem with my teaching, then your grade gets lowered.’ At The Hidden Genius Project if you had a problem, you told your mentor your the problem. Rather than being like ‘I am your superior’ it was like ‘I am your teammate.’”

This model of leadership complemented his intrinsic motivation to support those around him. “I’ve always worked better when it was for the benefit of others,” says Zachary. “When I’m doing something for just me, I’ll do it over time, but whenever someone is relying on me, I’ll get it done faster. People in The Hidden Genius Project were relying on me…learning that work ethic when people are expecting you to do something really pushed me to follow through.”

His track record of being motivated to serve others has also served him well. Before joining the Intensive Immersion Program, Zachary noticed his classmates were not loving the school lunches available to them. “My parents cooked a lot, and every time we would have a huge meal we would have lots of leftovers,” he says. “My friends were jealous because they were eating nasty school lunch.” So Zachary started his own small business in high school where he would serve up pizzas every friday to his fellow classmates. “I made pizza sandwiches and was selling them for $3. I think I spent $15 on ingredients and sold everything for $40.”

He carried this business idea into the Immersion Program, where he began thinking about ways to expand his lunch service. “I started making a website to support the mini pizza business.” But when he realized his high school lunch business wouldn’t be sustainable after graduation, he lost his interest in completing the project entirely, and all the momentum of his project came to a halt.

As the end of the summer neared, and his time in the Intensive Immersion program was coming to an end, Zachary still wasn’t fully invested in his own idea. Getting back on track with something that would be meaningful for him wasn’t coming to him.

Then Zachary attended one of the summer program business trips with his fellow Geniuses to Andreessen Horowitz, a venture capital firm in Menlo Park that “backs bold entrepreneurs building the future through technology” As he was introduced to the world of venture capital, it struck Zachary how this world had been hidden to him and his peers. Upon returning from the trip, he scrapped the mini pizza website he had been working on and poured his energy into building a portal that he hoped would demystify venture capital. His goal was to help open the door to firms like Andreessen Horowitz for “regular people” with business ideas. “I quickly came up with the idea to make a project that helped start ups,” says Zachary, “making the process for startups to connect to [investors] easier.” Once again motivated by the opportunity to be in service of others, Zachary was back on track. Not only did he complete the project, but he also presented his idea at our end-of-summer potluck where he led a discussion on the importance of sustainable seed investment. 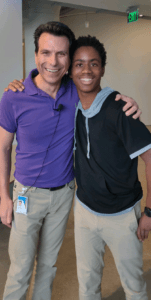 Before the summer ended, Zachary continued to forge pathways to opportunities. During a field trip to AutoDesk, encouraged by his mentors to network, Zachary took a moment to connect with an employee that was overseeing their visit. “I went up to talk with her for like 15 minutes and she talked to me about an internship.” Weeks before graduating high school he had an interview with Autodesk’s CEO Andrew Anagnost, and landed a 9-week summer paid internship where he has learned how to use Autodesk and other model tools to create projects. “I’m working on a Roller Coaster builder that you can test out with real physics to make sure it’s safe.” He’s been invited to present his Roller Coaster design at a convention with Autodesk in Boston, and plans to participate in a panel talk with his Autodesk team in Copenhagen, Denmark this September.

“To be honest I got a lot farther than I thought I would. I pushed beyond more boundaries than I ever thought.”

Zachary plans to attend UC Santa Cruz this fall, where he wants to learn about video game development. As a life-long supporter of his community, he continues to have his mind focused on how to serve others. “My main dream is to improve education. There’s a major disconnect between students and topics. I miss loving to learn and I want people to be able to do that.”

When asked what was the biggest take-away Zachary received from his participation in The Hidden Genius Project, he says “I don’t think I could limit it to one thing – to this day it’s the best decision I’ve made in my life. Being able to meet the people, going to places I’ve never been too…seeing the structure of those places and what they expect from you.

For future Geniuses coming up into the program, he offers the following words of wisdom: “You have to see the finish line and what you’ll get out of it in the end. Because of The Hidden Genius Project I’ve realized my worth, and that has really helped me become who I am right now.”

Since 2012, more than 5,200 students have revealed their genius through our
Intensive Immersion and Catalyst Programs, and so many more are waiting to shine.