This program untaps the genius of young Black males in Detroit 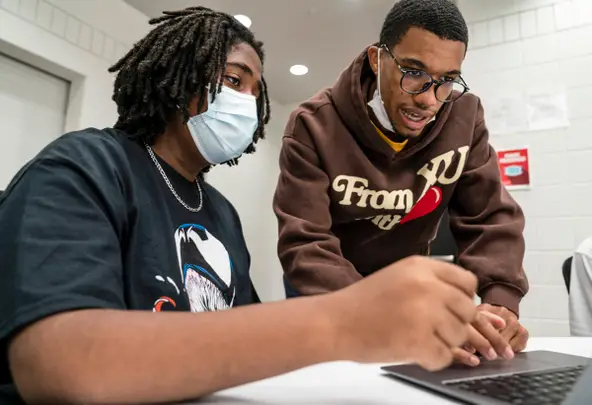 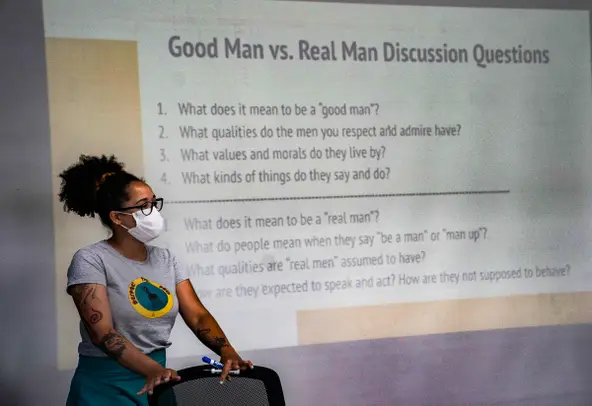 Fourteen years ago, William Malcolm could take out his resume and point to an impressive-sounding job title: “insurance and financial services executive.” While the words on the page described a businessman on the rise, Malcolm tells a different story.

“I used to own an insurance agency. I was in banking-financial services. And I did well because I’m a people person, but it wasn’t fulfilling,” said the 53-year-old Southfield native who graduated in 1995 from Western Michigan University with a degree in business administration. “There’s nothing like pulling up to a place and your name is on the outside and you don’t want to go in.”

The fulfillment Malcolm yearned for began to come into his life when he took the bold step of launching a menswear line (William Malcolm Luxe Collection) in 2009.

“I was always into fashion and design at a young age, but people in my life who loved me and wanted to protect me, would say I don’t know anyone who is doing this (fashion) professionally,” said Malcolm, who revealed how much he respected the creations his mother (Ernestine) made in her sewing room when he was growing up. “It was my wife (Tiffany) who heard me praying over my youngest daughter (Chelsea) and telling her she could be anything she wanted to be, who challenged me and asked: ‘When are you going to be what you want to be?’ My wife gave me her blessing and said, ‘I want you to pursue your passion.’ ”

But just as a good custom suit demands a strong shirt and tie combination, Malcolm felt moved to add even more flavor to his life at the same time he was unleashing his creative side.  And for Malcolm, the perfect accompaniment to a fashion career was to become a mentor.

“It’s funny, but once you’re doing something that is your purpose, you find energy to do other things,” Malcolm explained. “As I learned and worked through some lean periods, it felt like I was making up for lost time. And I made a commitment that I didn’t want another young person to not do what they’re passionate about, so I started mentoring.”

After first mentoring young adults, the designer of suits and shoes found his perfect match as a mentor at Frederick Douglass Academy For Young Men, a Detroit public school, where he mentored students through a program he started in 2015 as a volunteer called the Dream Kings Leadership Program. Malcolm’s in-person work at Frederick Douglass was halted in 2020 due to the pandemic. But today, he is back to being suited up and face-to-face with youths through a program that is new to Detroit called The Hidden Genius Project.

“I was built for this,” declared Malcolm, who is the Detroit site director for The Hidden Genius Project, a national program headquartered in Oakland, California, which “trains and mentors Black male youth in technology creation, entrepreneurship and leadership skills to transform their lives and communities.” 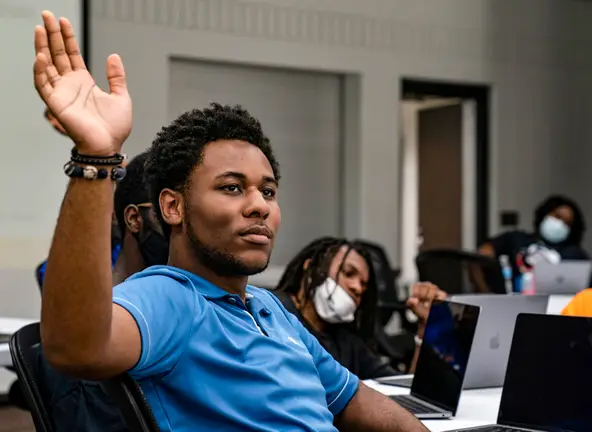 On Thursday, 15 of the 16 young men recruited by Malcolm to participate in the project’s 15-month Intensive Immersion Program, which targets students entering the ninth, 10th and 11th grades, assembled at the Dick and Sandy Dauch Club of the Boys & Girls Clubs of Southeastern Michigan (16500 Tireman) for a loaded 7½-hour day of activities. And roughly an hour before their 8:30 a.m. arrival, Jamie Berger was already making the group’s space at the Boys & Girls Club inviting for a full day of learning and fun. Like Malcolm, Berger says her new job as The Hidden Genius Project’s senior innovation educator and curriculum specialist at the Detroit site allows her to positively contribute to the lives of young Black males in a way that aligns with who she is as a person. 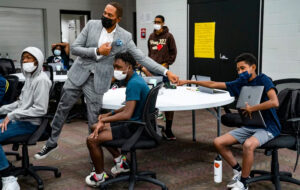 “I always have my LinkedIn alerts on and this position came up as something that I might be interested in,” said the 30-year-old Berger, who grew up in Ann Arbor and had previously been teaching in Washington, D.C. “I looked at the website and found the mission and I was like ‘oh my gosh!’ There’s Black people and there’s technology and I said, ‘this is right up my alley.’ The position appealed to me after being in a very bureaucratic school system, where there’s only so much creativity you can get, because you have to check off all these lists and all of these tests. But here there’s no grades and there’s no expectations that you have to pass this super lame standardized test.

“So now I have the ability to create all of these interactive lessons, like on the first day (June 27) I’m teaching them about algorithms in our computer science fundamentals and they’re like, ‘where are our laptops?’ And I said: ‘You don’t need computers to learn computer science.’ Then I took them out to the basketball court and said ‘you’re a robot, and you’re a programmer, program him to make a shot.’ The robots couldn’t do anything without instructions from the programmer, and lessons like that got them to speak to each other, interact with each other and be less shy right from the beginning.”

Berger shared that she also enjoys blending some football into the day, which for her means playing quarterback when the young men get a game going on the field behind the Boys & Girls Club during their recess time following lunch. And from feedback shared on Thursday, the lessons that Berger and The Hidden Genius Project have taught in a variety of spaces in and around the Boys & Girls Club have already made a significant impression on the participants in just the second week of the program in Detroit.

“We have a community, and we’re growing and we’re going to keep growing,” said Bryson Taylor, an 11th grader at the School at Marygrove and an aspiring scientist, who was describing the sense of brotherhood that has already been established among the 16 members in the first Detroit class of The Hidden Genius Project. “We all like the same things and that has helped us to connect really fast and the program really emphasizes brotherhood too.”

Bryant Parnell is an 11th grader at the University of Detroit Jesuit High School and Academy, and, like Taylor, Parnell spoke about brotherhood. In fact, Parnell was a catalyst for creating the early bond shared by the program participants by taking the initiative to go around to each table and get the names and schools of each person present as the young men were first coming together in-person. Parnell said the closeness the participants share makes learning more fun.

“I find it interesting how I can make links to different websites, but the really fun thing is that I get to do it with all of my friends in there, because I get to help people and they get to help me,” said Parnell, who expressed his desire to become a lawyer to “help people.”

Kameron Patterson made it clear that he plans to make the most of every moment during his time in the program when he said: “talent wasted is a really big travesty” during a leadership discussion the young men were having about the qualities of a “good man” and a “real man.” At age 13, Patterson is not shy about expressing and defending his positions, and he has already thought about how he would like to impact the future of The Hidden Genius Project in Detroit.

“As a first generation, I can’t wait to meet new brothers next year and next summer,” said Patterson, a future businessman or athlete, or both, who is entering the ninth grade at Berkley High School. “And I would encourage others in the community to try to interview for this process because it’s really fun here and we do a lot of stuff that helps you build up college prep — a lot of things — but it’s really casual and you still get to be a kid.”

And as The Hidden Genius Project enriches and nurtures young men in Detroit through the years, 16-year-old Josiah Forrest pledged that the brand of entrepreneurship being taught to the young men will ultimately directly benefit the city of Detroit as well.

“In this program, by the end of the summer, we should have a website built and we should have a business that we want to start that will better the community,” said Forrest, an 11th grader at University High School Academy, who described a walk around the surrounding neighborhood of the Boys & Girls Club which stirred him to want to make improvements for people living in the area. “We’re not regular entrepreneurs who open a business and try to help themselves mostly. We’re like radical social entrepreneurs who try to help the community first, and then ourselves.”

Forrest’s statement echoed the words of a CEO, and that would be Shawn Wilson, president and CEO of the Boys & Girls Club of Southeastern Michigan. Wilson says The Hidden Genius Project has found the ideal city in Detroit to spread its program and the ideal person to lead the effort locally in William Malcolm.

“I knew about The Hidden Genius Project for years, so I was a fan already. And so when I heard they were coming here, it just made all the sense in the world,” said Wilson, who spoke Thursday not from a boardroom, but instead from a space that will be a home to a future local business as the Boys & Girls Club at 16500 Tireman continues its efforts to promote entrepreneurship and economic mobility for the community. “The Hidden Genius Project is bringing this best in class, Black male mentoring program to Detroit under our roof.

“And then when I heard that they had selected William to run it, with his credibility in the space of Black male mentoring, you knew you had the right person to launch this program in Detroit because passion drives everything, and William is passionate about mentoring these young brothers.”