The Hidden Genius Project gets a hand from Comcast 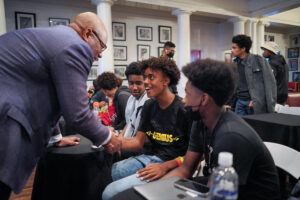 Broderick Johnson, a former member of the Obama Administration, and now a Comcast executive, met in late October with young men in Oakland’s The Hidden Genius Project, and made a surprise donation of laptops to 40-plus members of the program present.

The Hidden Genius Project trains and mentors young Black men in technology creation, entrepreneurship, and leadership skills, with the aim to transform their lives and communities.

“The tremendous impact that Hidden Genius Project has made in the lives of Black male youth in Oakland, Richmond, and the East Bay is the reason we’ve been a partner since 2014 and have steadily increased our support and commitment to the organization,” said Johnson, who is the executive vice president of Digital Equity and Public Policy for Comcast.  He is also chair of President Obama’s My Brother’s Keeper Alliance Advisory Council.

The event featured a fireside chat at which Johnson was interviewed by former Hidden Genius Kevin Butler, 22, of Oakland, who studied computer science and is now an educator and entrepreneur. Butler founded a startup called TechZen Collective, which supports artists seeking to participate in Web 3.0 and creates Non-Fungible Tokens (NFTs) to showcase their work.

The Hidden Genius Project partnership showcases Comcast’s long-standing investment in diversity, inclusion, and equity by empowering the members with digital training and leadership skills. Furthering its commitment to Oakland specifically, Comcast has also established more than 20 Lift Zones in the area. These provide free high-speed Wi-Fi from Comcast in community centers and other locations to allow students, seniors and families to get online and more fully participate in the digital economy.

The Hidden Genius Project was founded in 2012 by five Black entrepreneurs/technologists who were unnerved by the dramatic gap between high unemployment among young Black males and the abundance of career opportunities in the technology sector. In the decade since, the project has served more than 8,400 students and offered more than 612,800 hours of direct training.

“I’m delighted that our ongoing support will enable the organization to continue its important mission and potentially expand to other cities across the country, helping even more Black male youths,” Johnson said.

To read the original story, HERE.