By The Hidden Genius ProjectApril 28, 2020No Comments

Ronald Bolden III (RICH1 Hidden Genius Alum) joined our Intensive Immersion Program in 2017 as a member of our inaugural Richmond, CA cohort. Growing up, Ronald always dreamed of working in the legal field, but now that he’s been exposed to our program, he has his sights set on a career supporting entrepreneurs as a lawyer for a tech company. We sat down with Ronald to learn how The Hidden Genius Project encouraged him to major in Business Entrepreneurship at San Diego State University.

We know that you were a part of the first expansion cohort in Richmond. How did that feel?

It was really cool to join the first cohort in Richmond knowing that we were directly tied to the growth of The Hidden Genius Project. Our cohort had a lot of pride and we all understood the responsibility we had to represent Richmond, especially since we were partners with the RYSE Youth Center. 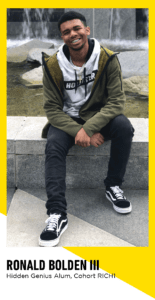 In the beginning, it was very interesting because I was gone for the first two weeks in the summer due to a big family vacation in New York. Before leaving, I had a meeting with Brandon (Executive Director) and David (Richmond Site Coordinator and Innovation Educator) and they stressed how important it was for me to stay connected to the new cohort while I was gone.

So on the first day of programming David and the entire cohort called me on FaceTime and asked me to introduce myself and say the mission statement on the spot, which I did, of course.I was surprised at how David constantly kept me involved as he sent reminder emails, virtual classroom assignments, and learning materials. While I was in New York, I didn’t fully understand the holistic part of the program, but when I returned home that all changed.

I immediately started learning how all of the assignments David shared were tied to our brotherhood, the community, and how to be a leader by helping others. From life skills to time management, I felt myself grow mentality with all of the knowledge that I was learning in the program.

My app was called ‘Fix Ya Ticket’. I created ‘Fix Ya Ticket’ to help support people who believed they were fined improperly. All you had to do was input the code of your violation and the app would show stats about traffic laws and violations related to your fine. You could even contact a lawyer to help you with your case. While creating my tech project, I learned how to use all of my skills in HTML, CSS, and JavaScript to include these features.

There are a lot of programs out there that say they help you do this and do that, but The Hidden Genius Project makes good on their commitment to their mission. I can confidently say that I was educated on every aspect of our mission statement. This was one of the first things everyone had to learn on day one in the program and it really became true for me as I feel my life has been transformed.

Also, The Hidden Genius Project was the only organization that genuinely cared about me as a person rather than just another person served. Everything was completely free and my mentors frequently gave me rides, food, and advice on life as well.

I had some experience in computer science through tech camps and creating virtual worlds in Minecraft with my friends using C++ and java. But when I joined The Hidden Genius Project, I really learned how to structure and format my code to make it easier to read and fix bugs. I didn’t know how important it was to leave comments in my code to help others understand what I programmed, but having David as my mentor helped reinforce and deepen my overall understanding of computer science.

Also, I didn’t know anything about corporations or startups before The Hidden Genius Project. I had no idea what a business pitch, entrepreneurship, or market research was when Akeem (Programs Director) started to teach us these terms and concepts. I ultimately became fascinated with startups and tech companies after visiting them in the summer and started getting into stocks and corporate law. Before Akeem started working at The Hidden Genius Project, he was a paralegal at a law firm and he mentored me about corporate law and entrepreneurship. He really inspired me to pursue entrepreneurship as a degree at San Diego State University.

As simple as it may sound, the most important thing I gained from the program was learning how to ask for help when I needed it and understanding how to support others.

In the beginning of the program, I used to be selfish and fly through the coding assignments on my own while leaving my brothers behind. It was all good until I got stuck on a problem because I would be too stubborn to ask for help. To kill time, I would just fool around by playing video games but then all of a sudden my brothers ended up getting ahead of me in the assignments. I soon realized that they were collaborating and helping each other to solve the problems that I would get stuck on to the point that now I’m behind.

David (Richmond Site Coordinator and Innovation Educator) often preached to us during our leadership lessons the ‘Each one, teach one’ mentality, which means that if you have the knowledge or solution to an issue, you should be able to share the knowledge you have so that everyone can move forward. This point really stuck with me and it motivates me to help others, which is why I give back as a Youth Educator.

Honestly, my life would be pretty different. The consistency of programming throughout the two summers and school year really helped me stay connected and committed to my brothers. Even with my hour-long commute, I learned how to manage my time better in order to attend programming and play lacrosse since I was captain of the team.

I also know that I wouldn’t be pursuing Business Entrepreneurship as my major at San Diego State University. More than likely I’d be pursuing a degree majoring in business finance which isn’t as exciting. Living in the Bay Area, I have always been exposed to the tech culture since my dad worked around there, but having the opportunity to go on business trips with The Hidden Genius Project made my natural interest in business blossom into a passion. Opportunities such as these helped me visualize myself in pursuing tech and entrepreneurship as a career path.

Well, I’m heavily involved in The Hidden Genius Project still as a Youth Educator. I’ve supported David and Abraham by helping other Richmond Geniuses with their tech assignments in the summer. I like being able to give them the extra support they may need from my perspective. I enjoy being on the other side of programming, as I was just in their seats not too long ago. It felt good to keep that ‘Each one, teach one’ mentality going as all of the Geniuses were super appreciative of my help. I ended up being their go-to person with their projects and we even got to hoop on the court.

Besides supporting programming, I’ve also facilitated basic HTML workshops at Brothers Code to middle school youth, where I showed them how to create their own websites. They learned how to add images, descriptions, forms, and everything. I enjoyed working with all of them as I think it’s important for people who look like me to teach young people tech because it’s a different experience. We are all black and coding together. It gives them an opportunity to see themselves in me as a black man coding which leaves a lasting impression.

If you could talk to yourself just before you applied, what would you say?

I would tell myself that The Hidden Genius Project is a great program and that it’s actually worth it. Everything that I’ve learned from the program has really supported my growth as a young adult. If you really enjoy coding, enjoy learning about entrepreneurship, enjoy being a leader, or just want to connect with other young brothers then The Hidden Genius Project is for you.

Since 2012, more than 6,200 students have revealed their genius through our
Intensive Immersion and Catalyst Programs, and so many more are waiting to shine.