We learned long ago never to underestimate or limit a Genius. Quentin Smith is no exception. Like so many of our Alumni, he did things his own way in 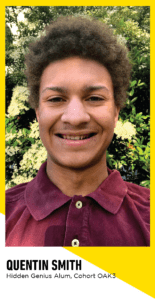 our program. Testing the limits of our Intensive Immersion program as a “long-distance” Genius, Quentin faced many challenges as he worked to balance the demands of our 15-month program while attending Stevenson Boarding School in Pebble Beach, California – a more than two-hour drive from Oakland. At times he turned to technology (as a Genius does) to keep pace and stay connected with his peers in the East Bay, relying on Google Hangouts to virtually be there.

“[It was a challenge] being able to stay caught up with the other Geniuses,” says Quentin. “What helped with that was getting calls or emails from The Hidden Genius Project as well as using Hangouts, so that I could keep learning while away for school.” Beyond technology, it was his own resilience paired with the camaraderie and loyalty of his fellow Geniuses and his instructors that made the difference.

“At his boarding school, he really had to press to hang in there, being far away from family,” recalls Executive Director Brandon Nicholson. “It was a great point of pride for him to see it through.”

His presence in the program during the summer months was critical for him to catch up. Quentin immersed himself in all aspects of the program, finding himself especially drawn to the Entrepreneurship class. “I fell in love with that,” he says. “We started looking at stocks, making mock portfolios, limited liability—we just learned a bunch of new things early. It was great because when I took economics classes in high school I was able to pass with straight A’s.”

While the exposure to new subject matter was clearly a motivator, Quentin reiterates the value of the kinship and community he found through The Hidden Genius Project. “It was always so interesting to hear the opinions of other students. They appreciated everyone’s opinion, which made the program really inclusive.” Comparing this experience to a previous mentorship program he’d been part of, Quentin says the interactivity of The Hidden Genius Project set it apart. “[In that other program], there were mostly lectures,” he recalls. “But with Hidden Genius, you connect with more people.”

The Hidden Genius Project mentors’ approach was also unique. “I keep calling them teachers but they felt closer than that, more on our level,” explains Quentin. “They’re all really honest with us, and you know they’re going to let you know how it really is, because they’ve been in our situation. Rather than teachers, they’re more like older brothers. This just makes the community really close, and that’s so important.”

He’s also developed an interest in fiction writing. When asked what kind of story he might write to capture The Hidden Genius Project experience, he says, “I would write a story with a main theme of companionship and how the people you meet may unknowingly change your life in the future.” Linking two of his interests, computer science and writing, Quentin says he’s considering building a storytelling app.

One thing he knows for sure is that The Hidden Genius Project will be there in his corner all along the way no matter where he goes—just as they were when he was in boarding school. “They’re constantly still in touch with me, reaching out with scholarship opportunities and advice through emails and phone calls. I just know they’re always going to be there for us.”