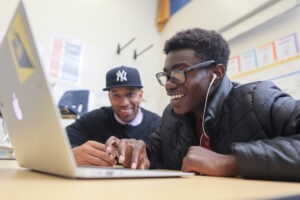 The nonprofit worked with 120 young Black men from Oakland, Richmond, and Los Angeles this summer on community-focused tech projects.

Over 500 people gathered virtually on Thursday last week to celebrate the accomplishments of 120 young Black men—including 46 from Oakland— who completed a 15-month intensive tech immersion program with The Hidden Genius Project.

Since 2012, the nonprofit organization has mentored and trained Black male high-schoolers in leadership, entrepreneurship, and technology creation to uplift and benefit their communities. Last week’s celebration showcased the work of current members, youth educators, and program alumni from Oakland, Richmond, and Los Angeles.

The virtual event opened with a set from Dj D Sharp (the official deejay of the Golden State Warriors) and a welcome from program director Akeem Brown, before moving into panel and group discussions where young people reflected on their experiences in the program.

“I made bonds with my brothers, and the 15 months felt like nothing,” said one young person, Kaelan Lovan. Another student, Zander Jimenez, said his biggest takeaway was learning about how community and personal leadership fit together.

A portion of the virtual celebration was dedicated to project presentations. Robert “Sonny” Bucker, a student from Richmond, talked about his experience in The Hidden Genius Project’s business track program and about launching his website Sound Basement, which seeks to provide high quality but affordable soundtracks for media producers and artists. All of the Genius’s projects can be viewed on the program’s Youtube channel and highlights from the celebration can be found here.

One of the panel discussions featured the family members and parents of program participants. Nicole Solis, a teacher, said that her son “shed his little boy skin” during his time in the immersion program. “Watching him grow socially, emotionally, and physically was such a magical time,” she said.

Bryan Hancock recounted that it was only until he and his son attended the entrance interview that he understood just how much The Hidden Genius Project had to offer.  “My son is not only learning about coding, but entrepreneurship and building a brotherhood,” said Hancock.

Monique Jiminez, a parent who helped The Hidden Genius Project design its college prep curriculum, said her son, who is one of the older participants, “really expanded in how he connects and networks with people.”

Changing the narrative about Black men in tech

Sean Valentine, Director of Strategic Initiatives at The Hidden Genius Project, said the organization’s purpose isn’t just to teach young Black men about tech but to “change their minds about the landscape of opportunity” that’s available to them in the industry.

Racial diversity within the tech sector is notoriously lacking. Diversity reports published in 2018 and 2019 showed that only 2 percent of tech workers at Facebook and Google are Black. Microsoft (3%) and Apple (6%) didn’t fare much better. Tech entrepreneurs in general, said Valentine, also face tough odds in getting projects funded by venture capitalists.  “Most firms back less than 2% of the pitches that they receive each year,” he said.

To create more opportunities, The Hidden Genius Project recently launched the Alumni Venture Seed Fund to support the advancement of young Black entrepreneurs. So far, the fund has raised $150,000, which will be split among five Hidden Genius alumni.

Valentine stressed the importance of shifting the narrative when discussing the lack of diversity, and especially Black people, in tech. “When we talk about Blacks in tech, we need to frame it from an asset-based lens that recognizes us as sources of incredible innovation,” said Valentine. Companies, he said, need to also start recognizing and paying attention to the quality that can be found in a broader, more diverse talent pool.

The Oaklandside spoke with three Oakland-based Geniuses—Ezra Tramble, Hesten Parrish, and Julian Wilson—before the celebration to get a fuller picture of their experience at The Hidden Genius Project. Each became involved in different ways.

“I was already coding with the David E. Glover Technology Center in East Oakland, which was sharing space with The Hidden Genius Project during the summer,” said Parrish. He was naturally curious and once he reached the eighth-grade, he was ready to apply.

Parrish’s app is called “Flag the Grade” and was inspired by him wanting more transparency in the grading process. “It seeks to cut communication barriers between students and teachers,” said Parrish. Instead of emailing a teacher or messaging through apps such as Slack, Parrish’s app allows for grading, attendance, and direct communication to happen all in one place. “Long term, you will be able to see the emerging trends among students and teachers as it will keep track of all contact,” he said.

Tramble’s project is a mobile app that tracks the top 500 cryptocurrencies. His app will allow users to make informed decisions about which coins to invest in and sell, in real time. He said his inspiration comes from “my brother who invested a lot, and I got wind of what he was doing.”  Tramble describes his app as “simple, bare bones”—even someone who doesn’t know a thing about cryptocurrency, he said, will be able to understand and use it.

Wilson, a program alumnus who now works with Hidden Genius as a youth educator, worked with the organization’s first Los Angeles cohort over the summer, helping them with basic coding in HTML, CSS, and Javascript.  For new coders, he said, finding and fixing bugs can be very difficult. He also supported the cohort with their assignments and the creation of their websites. “One big takeaway was understanding that learning and teaching are two very different aspects because you have to understand [the content] well enough to be able to explain it,” said Wilson.

Communications Manager Denzel Russell said youth educators like Wilson are like “ambassadors for The Hidden Genius Project.” The organization has partnered with schools and community sites such as Head Royce School and West Oakland Youth Center, where youth educators have served as mentors to younger students. Those opportunities were especially impactful over the summer, said Russell. “With the pandemic, we were able to leverage all of our youth educators to support our programming while we transitioned to an online format,” he said.

By getting placed at other organizations, youth educators like Wilson are also able to explore different types of work and career pathways, and gravitate to wherever they feel their strengths are, said Russell, “whether that be entrepreneurship, leading your community, creating tech or geeking out on all the code.”

At the end of the day, said Valentine, it’s all about creating the conditions for youth to reach their full potential. “We can do these two things,” he said. “Cultivate our youth, and invest in them.”