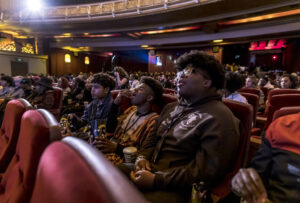 The film, directed by Oakland native Ryan Coogler, was introduced to the packed audience of community members and budding young entrepreneurs by KGO TV’s Julian Glover, who led the crowd in several chants of “Wakanda Forever!” before the screening began. As the movie played, there were moments of both raucous applause and pin-drop silence, with an excited murmur moving through the audience as the end credits rolled.

The event was the result of a partnership between Disney’s Future Storytellers initiative and Oakland’s Hidden Genius Project, and for Denzel Russell, the choice of both film and venue was especially meaningful.

“Being able to come together where the Black Panther Party was originally formed in Oakland and the connection to the ‘Black Panther’ movie with the Hidden Genius Project, and understanding our Black founders who started the organization — in terms of the work that we do, the community we serve and how we continue to impact young people of color in a positive way — is everything,” the local nonprofit’s communications manager told The Chronicle after the screening.

Discussing his expectations for “Wakanda Forever” before it began, Hidden Genius Project alum Kyron Loggins said he hoped it would honor the legacy of the late “Black Panther” star Chadwick Boseman, who died of colon cancer in 2020.

“Chadwick, he created an icon,” Loggins said. “But I think that what we can keep and preserve from that is he had such a pride in his role, and I see that with this cast still. There’s so much pride in their role, not only as superheroes but as representatives of our community.”

Fellow Hidden Genius Project alum Kevin Butler echoed his friend’s sentiments: “I know there was a lot of controversy around what Disney should do with the role after his passing. But I think it’s important that, even if there isn’t a next Black Panther, that we do continue on and understand that Chadwick Boseman doesn’t just represent Black Panther, but he represents the hero that we can all be in our lives.”

Loggins added, “What we can take away from this film, even more so than maybe the last, is what strength looks like as a unit, as a community, when you don’t have that figurehead.”

Founded in 2012, the Hidden Genius Project represents that ethos with the value of ubuntu (a Bantu term meaning, “I am because we are”), a foundational element for an organization geared toward helping Black youth garner entrepreneurial, technological and leadership skills. 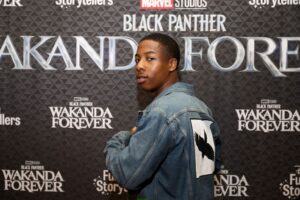 In conjunction with the release of “Wakanda Forever,” the Hidden Genius Project is one of several organizations nationwide receiving a $1 million Disney grant between them to support nonprofits that provide STEM and arts education and mentorship for youth from underrepresented communities.

“As a whole, I think the more we understand (ubuntu), the better off the world will be,” Russell added. It’s a message very much in sync with the “Black Panther” franchise, and one that resonates deeply with the young members benefiting from the Hidden Genius Project.