In The NewsSponsor X

McLaren Racing has been working with one of its U.S.-based tech sponsors, Smartsheet, on a DEI program called Sponsor X that passes through the software company’s F1 car branding to worthy causes. The activation is part of a multiyear deal between the two companies that includes McLaren using the company’s workplace management products in its operations. The Bellevue, Wash.-based company is one of more than a dozen American brands aligned who have aligned with the English racing team and road car company in recent seasons. Smartsheet’s spend is unclear but deals with McLaren run well into the seven figures annually. The Sponsor X initiative is somewhat counter-intuitive given that Smartsheet is paying McLaren for assets that it’s then giving away to a different entity for free, but Smartsheet CMO Andrew Bennett said that his company’s executive team and board feels like they can “have a lot bigger impact by doing things that’s are different, innovative and bold … and have ideas that maybe even push the boundary a little bit too far.” Bennett: “We didn’t know exactly what we were going to do with the sponsorship (when they signed on in 2021). We signed on and we thought a lot about, ‘How do you do something different and have a bigger impact?’ And the idea here is that with this amazing platform with McLaren and F1, we can say more about who we are by telling a story about other people. And then we get to be associated with that story.” 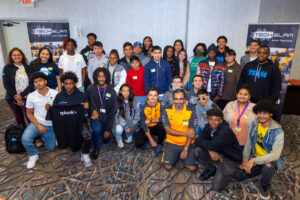 SUPPORT THE YOUTH: Smartsheet first did the Sponsor X initiative in Australia earlier this season with a group called Deadly Science that works with aboriginal students Down Under, and it then followed it up by working with one called The Hidden Genius Project at COTA last month. Oakland-based The Hidden Genius Project has been mentoring Black youth about opportunities in STEM since 2012, and its vision fits in with F1 because the sport has a huge focus on engineering. Among the activities put on during the week of the U.S. Grand Prix was a “tech slam” with a couple dozen local Austin high school students who did workshops around coding and Q&As with McLaren’s engineers. Other sponsors who were involved with it included Google, Splunk, Cisco and Google plus the city of Austin, as were McLaren’s drivers, Lando Norris and Daniel Ricciardo. The Hidden Genius Project Founder and Exec Dir Brandon Nicholson said: “Now we’re a decade later (after the company’s founding) in Northern California, L.A., Detroit, Oakland, Chicago and Atlanta with a seven-figure budget and served over 9,000 young people on three different continents, so I’m extremely proud of the work our team has done to support young people. … This gives us a platform and stage to leverage the Smartsheet and McLaren brands, and I’m an F1 fan, have been for several years – Lewis Hamilton brought me into the sport.”

MORE ENGAGEMENT: Smartsheet says the Sponsor X initiative is driving more engagement around the brand than when its usual logo appears on the car, which it takes as a sign that the measure is working. Another indicator it will use to judge success is whether the groups that get featured on the car see any tangible benefits from the program; for example, the Deadly Science group in Australia was able to leverage the publicity it got from its week on the car to get a big spike in donations including a deal with the postal service there to ship things for free. Smartsheet was founded in 2005, has more than 3,000 employees and does work in 190 countries. Bennett says the original reason that Smartsheet got into F1 sponsorship is because it needs decision makers from businesses around the world to know about what “who we are, what we stand for and have the opportunity to try what we do.” He also said that some of the key markets for Smartsheet like Australia, England the U.S. happen to be key markets for F1, making the sponsorship more appealing as it can then activate in those countries.