By The Hidden Genius ProjectSeptember 29, 2018No Comments 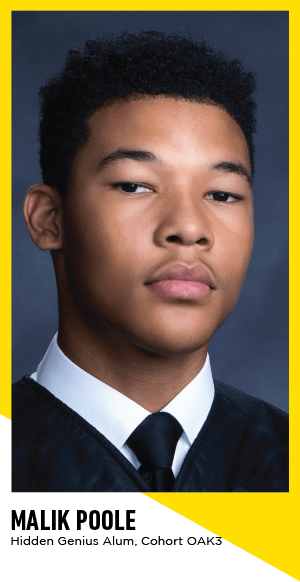 One of the first things our Geniuses are required to do during the course of their 15-month Intensive Immersion Program is to learn our Mission Statement:

The Hidden Genius Project trains and mentors black male youth in technology creation, entrepreneurship, and leadership skills to transform their lives and communities.

From day one, they understand they are not just there to code. They are not just there to become future businessmen and leaders. It’s a full package of skills guided by the express purpose and intention to make a positive impact on their own lives and their communities, through a holistic approach that meets them where they’re at, and values them for who they are. For Malik Poole, our mission became personal. When deciding on what he would focus his efforts on in designing his first app, he looked to his own family — specifically his uncle who was serving time in prison — to make a difference. And while he could have stopped there, his empathy and vision set his sights on making an even bigger impact. “Thinking about how much he’s gonna have to go through made me want to do something about it,” says Malik, reflecting on his uncle’s experience. “And he has his family. Other inmates don’t necessarily have that.”

Through his research, Malik found that 67% of recently released people are back in prison in three years, and that number goes up to over 70% in five years. Once he identified this problem, the answer was clear. He set to work designing his first app, HIRE, which stands for Helping Inmates Reach Employment. “It’s a database list of jobs that is open specifically for people who were once incarcerated,” explains Malik.  The focus of the app is to provide support for people who have recently been released from prison throughout their process of searching for a job and getting hired, with the goal of cutting down on the pattern of formerly incarcerated citizens returning back to prison shortly after release.

In addition to the program instilling a spirit of community service, Malik speaks to the power of learning about coding, entrepreneurship, and basic economics. In his opinion, none of these lessons rank higher than the experience he had learning in an empowered and resilient way. Malik quotes Hidden Genius Innovation Educator Hodari Tourè, sharing his “go fish” approach: “Did you go fish? Did you look it up and try to find it?” Malik lifts up this message as immensely impactful, both to his time at The Hidden Genius Project and beyond that space to his life and development overall. The “go fish” approach has helped him learn how to learn on his own and how to go out and seek information rather than wait for answers. “Whenever I’d run into trouble,” he says, “instead of waiting, I’d look it up. That’s a really valuable skill.”

Another of Malik’s major takeaways from The Hidden Genius Project is an enhanced ability to connect with people – both in professional and personal ways. “Aside from knowing how to learn,” he says, “knowing how to network, get information, communicate with people, and use the connections you have to put your foot in the door are things [Executive Director Brandon Nicholson] really hammered into us, too.” These skills have helped to accelerate Malik’s learning and progress, while the inward-facing community building has supported the deepening of relationships with his peers and mentors. “I felt closer to everyone there,” Malik says about his cohort experience. “It was a kinship. A brotherhood.” He references a ritual of acknowledging and honoring the ancestors as just one of the powerful ways the program inspires a sense of connectedness. He also speaks to the concept of ubuntu that is practiced by The Hidden Genius Project as key to establishing the strong bonds he gained. Originating in southern Africa, ubuntu refers to the philosophy that all humanity shares a common bond, that “I am because we are.”

It is easy to hear the reverberations of this philosophy in Malik’s aspirations and in his commitment to inspiring others. Working with younger students, including a recent opportunity to teach code to middle schoolers during a summer program at Head Royce School, is one way he’s been able to do this, in part thanks to the connections made through The Hidden Genius Project. This is one of many remarkable and enriching experiences Malik has accessed at just 17 years old. He is hungry to learn more, grow more, and make a bigger impact.

Malik acknowledges that he wouldn’t be as politically active without the influence of the leaders of The Hidden Genius Project, adding that there was real power and learning in “seeing how they address political issues and contribute to community.” Finding himself surrounded by other young Black men just as passionate and involved as he was, supported this particular strand of growth. Now a senior at Deer Valley High School in Antioch, CA, Malik serves as president of the Black Student Union (BSU), which he became an active member of as a result of the influence of The Hidden Genius Project. “It made me want to inspire other people the same way they inspired me.”

Next fall Malik is looking to attend either Morehouse College, Howard University, or UC Berkeley, and plans to pursue a degree in computer engineering or computer science, while continuing to find ways to merge his passion for community service and activism with his passion for technology. “I want do something that matters. I want to be active in the community.”