By The Hidden Genius ProjectJuly 31, 2018No Comments

For Kevin Butler, OAK4 Hidden Genius alum, brotherhood is at the core of his experience as a 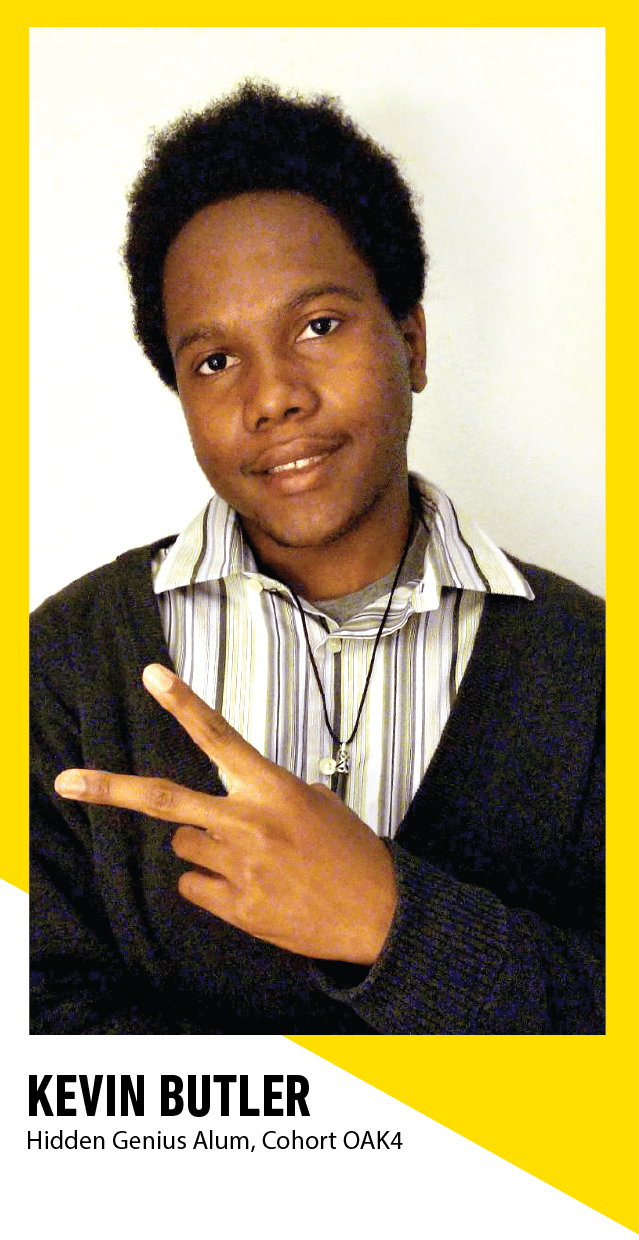 Genius. In sharing what makes The Hidden Genius Project unique, Kevin says, “It’s definitely that sense of brotherhood, just being connected with my brothers in that special way. It’s not like other programs or like anything I’ve ever experienced.”

Kevin, an 18-year-old graduate of Oakland’s Conservatory of Vocal and Instrumental Arts High School (COVAH), recently completed his freshman year at Merritt College in Oakland. Though he is musically inclined, Kevin decided that for now, he’ll keep that aspect of his life as a hobby while he turns his full attention to Computer Science, which is his major at Merritt. He’s not yet certain what precise career he’ll pursue, but he’s sure that it will be in information technology (IT) or any technology field; The Hidden Genius Project has been instrumental in supporting Kevin to get to this point.

While Kevin modestly says he’s just a “regular guy” who goes to school and enjoys playing video games, he took the initiative to search for a program he could participate in over the summer and, in doing so, found information about the Intensive Immersion Program that sparked his interest. He had already been a participant in other tech-focused youth programs, but The Hidden Genius Project was a new and different experience for him. In addition to the solid technical skills he gained relative to building websites and running a successful business, the Intensive Immersion Program provided Kevin with powerful leadership training. “I think the most important and impactful information was the leadership part,” Kevin attests. He says that “leadership” in this case is shorthand for life skills, how to be responsible, and how to attain success, with particular emphasis on navigating all of these things as a young Black man.

Kevin says he experienced more of a “get in, get out kind of thing” with other programs, adding that “The Hidden Genius Project feels like a lifelong thing.” He stays connected to Executive Director Brandon Nicholson and with the other mentors at the Project, and maintains strong relationships with his fellow cohort members; “They feel like actual brothers,” he says. “One of the biggest parts of the program is the brotherhood aspect, which is having us all work together and teaching us the practice of ubuntu.” The philosophy of ubuntu, a term that originated in South Africa, is translated to English as, “I am because we are,” the idea being that we all share a common humanity. In the context of The Hidden Genius Project, Kevin applies it to mean, “If one of us has something going on, then we have to all help each other.”

These conditions allowed for Kevin to thrive in the program and beyond. Without The Hidden Genius Project, he says, “I definitely wouldn’t be where I am today. I definitely wouldn’t have an internship at Kaiser… I wouldn’t be as successful or as happy as I am today.” There’s audible excitement in his voice when he talks about his internship at Kaiser Permanente, which he got through The Hidden Genius Project. He’s working in the IT innovation department on a project focusing on how virtual reality can be applied in the health field. On top of engaging with dynamic and cutting-edge technology work, there’s the added benefit of other Genius Alums being placed in the same department. “It’s nice being able to do it with some of my brothers from The Hidden Genius Project,” he shares. “There’s never a dull moment.”

As a Hidden Genius Alum, Kevin is no longer obligated to attend programming, however on any given weekday you can still catch him at the office working on projects or meeting up with his peers and mentors. He’s also participating in our pilot alumni entrepreneurship with BASE Ventures, a black-owned, black-founded venture capital firm based in Richmond, CA. He is collaborating with three other Genius alumni from cohorts OAK3 and OAK4 to develop his peer (Perry Irving of OAK3) custom skateboard design app into a youth-driven venture.

Among all of the skills and experiences that his experiences have provided, the concept of ubuntu continues to rises to the top for Kevin. He plans to stay connected to the project through volunteering his time to support future Geniuses, reciprocating the investment in him.