Julian Wilson, Oakland Cohort 6 Hidden Genius Alum, joined our program with absolutely zero coding experience, but explains how he “fell in love with coding and programming” during his time in The Hidden Genius Project. Motivated by his passion for sports and tech as a student-athlete, Julian developed a shooting analytics tracker app which he hopes inspires other youth to pursue a career in the sports industry without having to touch the court. Recently named a finalist for the Posse Foundation four-year merit scholarship, Julian plans to continue his success as a student-athlete at Lehigh University, where he will play football and major in Computer Science.

How have you’ve been? 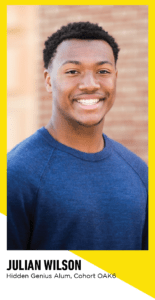 Life has been good. During the pandemic, I really used that time to focus on bettering myself. I worked on my skills in football, worked as a Youth Educator for The Hidden Genius Project, and strengthened my focus towards school. I am looking forward to graduating and moving on to the next chapter of my life in college. At the moment I am running track and working out for football which I will be playing at Lehigh University. Overall, school has been going very well and I expect to finish my last semester very strong.

What does it feel like to be a Posse Foundation scholarship finalist?

It is an amazing feeling and opportunity, knowing that all my hard work paid off and I was able to earn the Posse Foundation scholarship to Lehigh University. It is very relieving to know that I am able to put my parents in a position where they don’t have to pay a large amount of money for me to go to college. This is a way I am able to pay my parents back for everything they have done for me throughout my life. They have put me in positions to succeed.

What I enjoyed the most about the program was being around other African American teenagers that had a similar goal as me. It is very refreshing to be around others that are chasing a dream and doing whatever it takes to get there. Going on business trips during the summer portion of the program was really fun as we got hands-on experience in some of the biggest tech companies in the world. It was also a time where I could connect with other Geniuses in the program outside of my cohort.

The two biggest moments for me being a part of the program was learning about leadership and computer science. The things I learned in our leadership sessions gave me a better understanding of what it means to be a leader inside and outside of the program. Those conversations helped shape the type of leader I want to be for my community and my peers, especially as a Youth Educator. I believe my experience with leadership helped me earn the Posse scholarship as it was one of their key evaluation areas and I was happy to share my perspective on it.

When it came to computer science, I absolutely fell in love with programming and coding during my time in The Hidden Genius Project. All of their coding classes and assignments pushed me to want to major in computer science at Lehigh University.

My app was called the Shooting Average Tracker and it allowed basketball players to keep track of their shooting stats from both games and practices. In the app you would select whether you wanted to input a game or practice, then you would input the number of shots you took and made. Next, it would calculate your shooting percentage and paste it on a page where you can see all your data from games and practices.

My biggest challenge developing Shooting Average Tracker was completing the build of my app in Flutter. The hardest part was understanding how to connect the app to Firebase, which allows the app to have a database. I worked very hard during my second summer to finish my app but was unable to due to bugs and errors. Despite the setback, I was determined to get it done so I came in every day the following week to finish my app. I eventually was able to submit my final project thanks to the support of Hodari Touré [Director of Curriculum and Innovation] and David Malone Jr. [Richmond Site Coordinator and Sr. Innovation Educator].

My coding ability, leadership, business, and networking skills have been the most beneficial for me. Coding has been the foundation for what I want to study and do in my life. It has influenced me to major in computer science and have a career in data analytics. The leadership and business areas have encouraged me to start my own business one day where I teach younger kids about data analytics. I want to give them the opportunity to work in a sport of their choosing without ever having to touch a field or a court.

The biggest takeaway from the entrepreneurship lessons is learning how to network. I have used my networking skills recently to connect with the Golden State Warriors front office in another mentorship program. With the use of my networking skills, I am currently building relationships with Bob Meyers [General Manager],  Mike Dunleavy, Jr. [Assistant General Manager], and Nick U’Ren [Director of Basketball Operations].

A sense of community that I didn’t really have before. I was around other young Black men that worked hard and wanted to achieve their goals and aspirations and I was able to create relationships that I will remember for the rest of my life.

I believe that my path would have been completely different without The Hidden Genius Project: from the skills I’ve learned, to the people I know, even the college that I will be attending.

Before joining The Hidden Genius Project, I always fluctuated with what I wanted to do and I never had a set plan. Now I do have a set plan on what I want to become in life, and that is to become a sports data analyst. After graduating from Lehigh University my goal is to find a job working in data analytics for a college football, soccer, or baseball team. I’m excited about the path I’m on and am eager to learn more about data analytics and hopefully start a program where I can teach other young people how to work in the same field.

Overall, The Hidden Genius Project has done so much for me and I am extremely grateful for everything they do.

In what ways has the staff of The Hidden Genius Project stayed continued to support you since graduating from the program?

The Hidden Genius Project gave me the opportunity to become a Youth Educator and has supported me throughout the Posse Foundation scholarship process.

I started working as a Youth Educator after completing the program in the summer of 2019. As a Youth Educator, I taught a leadership course as well as HTML, CSS, and Javascript to new cohorts of Geniuses. Being a Youth Educator was an amazing experience as I was able to really put everything I learned from The Hidden Genius Project to practice. To teach something you must have a different perspective on it so I was able to learn even more while providing knowledge to my peers. I believe the Geniuses enjoyed my lesson as I tried to make them as possible during the Zoom era.

When it came to preparing for the Posse Foundation, Arnold Lopez [Alumni Coordinator] and I would sit down before the second and third rounds of interviews and would review possible questions they might ask me. This really allowed me to go into each round more prepared which helped me be more collected and calm.

I would tell myself from the beginning to make as many relationships as possible because you never know when you will need somebody in the future.

Soak in everything you can, all the information that The Hidden Genius Project provides is very valuable whether it’s during a field trip or a regular day of coding. Be open-minded and ready to learn.

Since 2012, more than 8,000 students have revealed their genius through our Immersion, Catalyst, and Community Partner Programs, and so many more are waiting to shine.