By The Hidden Genius ProjectMarch 29, 2019 No Comments

When you think about a typical day in the life of a 16-year-old, the first things that come to mind may not be analyzing stock investments, designing a 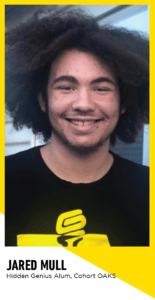 Currently a junior at James Logan High School in Union City, Jared’s passion and ingenuity come to a head during the after-school hours. He spends three days of every week either teaching technology to black and Latinx middle school students at Boys and Girls Club of San Leandro, or interning for the technology-driven analytics strategy at Blaylock Van—a black-owned investment firm based in Oakland. These connections round out the list of life and career skills Jared says he gained from his time in The Hidden Genius Project’s Intensive Immersion Program, including things that might be expected: increased understanding of coding, networking skills, the elevator pitch, and market research. Jared also casually includes among the list “the tools to dismantle a lot of the indoctrination against our black community.” It’s at the intersection of this heightened social consciousness and knowledge of technology that his passion is ignited.

Jared has given a lot of intentional thought to the journey ahead and how he’ll apply his learning to his career. His ambitions include becoming a computer scientist or machine learning developer; forming a collective with his peers to develop multiple quantitative apps in order to generate revenue. He also has his sights set on developing quality apps that support communities affected by the housing crisis–something he has witnessed first-hand in the Bay Area. Jared previously demonstrated his desire to interrupt the patterns around housing and homelessness when he was tasked with developing an app as part of his Intensive Immersion Program experience. “I was reading about the 2007-2008 housing market crash,” Jared shares, “and noticing that there was gentrification in places like Oakland, San Francisco, Hayward, Fremont, that was being used like a cycle to further inflate the price of housing in our communities.” The issue of inflation provided a touch point that Jared felt he could impact by sharing his knowledge and supporting folks to see the less visible costs of home ownership. “I wanted people to be able to use this calculator to understand how much money it would cost you a month to pay for a certain house,” he says.

This thoughtfulness and concern for making a positive impact in the world might be something Jared was born with, but The Hidden Genius Project has played an unquestionable role in bringing it out of him, and he doesn’t take for granted the multiple ways The Hidden Genius Project has shaped his perspectives, his path, and his future. In addition to giving him confidence for his future and humbling him to the opportunities ahead of him, Jared says that without this experience, “A lot of the tools I use to figure out what’s going on in the world, I wouldn’t have.” He speaks emphatically about the positive influence of his mentors in the Intensive Immersion Program. “I was one of those people who still believed that different groups of people were different from each other, and Hodari really had me grasp the idea that social constructions make you think that. You realize that you’ve been lied to your whole life.” Along with this heightened social literacy, Jared has gained a solid foundation to be successful as an entrepreneur. He explains, saying that without The Hidden Genius Project, “I’d have no idea how to start up anything, or how to react when things go wrong in a business. I’d have no strategies developed.” Beyond this, Jared speaks to the power of being surrounded by deeply caring mentors who also happen to be black men. “I’m the only black kid in my calculus class. You look around just in business and mathematics, and African American males are usually lower than 1% of that population. The Hidden Genius Project has created a brotherhood in order to address this exclusion.”

These two sets of knowledge—one set of hard skills and strategies for succeeding in business, and a second set of critical thinking and social engagement tools—join forces to position Jared and other alums of the program to create waves in the tech world. These young men aren’t just focused on building personal wealth with their hard-earned and newly learned skill sets; rather, they are determined to use what they know to change the world around them for the better.

Since 2012, more than 4,200 students have revealed their genius through our
Intensive Immersion and Catalyst Programs, and so many more are waiting to shine.