Isaiah Martin, Cohort Oakland 2 (OAK2)  Hidden Genius Alum joined The Hidden Genius Project as a 13-year-old student entering 9th grade with zero experience in computer science, but attributes his interest in technology to our Intensive Immersion Program, “The Hidden Genius Project played a major role in not just exposing me to the tech industry but also in teaching me how to think critically, solve problems, and use a growth mindset to further my skills.” In 2017, Isaiah enrolled at Dartmouth College and continued to reveal his brilliance to the world, excelling inside and outside of the classroom by receiving high honors from his professors and participating in various technology internships at Opendoor, Oracle, and Uber. Today, we’re honored to highlight Isaiah as he received his degree in Computer Science this month and is already working full-time as a Software Engineer at Microsoft.

How does it feel to graduate from Dartmouth College, an Ivy League school? 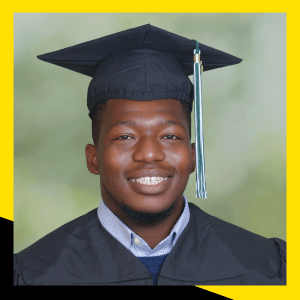 Graduating from Dartmouth is an honor as The Hidden Genius Project gave me a head start in tech, and I don’t think I would have made it this far this fast without the program. I worked really hard in high school, but did not think it could go as far as to an Ivy League school. As I progressed at Dartmouth, I learned to see the value that Dartmouth saw in me, which I think is an invaluable lesson. It’s one thing to show promise to other people, and an even better thing to see that promise in yourself before anyone else does. Dartmouth was just a higher platform for me to do that which came with many opportunities and benefits. As a Black man in computer science I’ve always been isolated which makes it even more important to believe in yourself and your abilities. There is not a lot of diversity in tech, which is why The Hidden Genius Project is here. As pioneers, we have to be brave and committed to making tech a more diverse and better place for those to come. I’ve learned to just do my best, believe in myself, and be content with that.

How did The Hidden Genius Project prepare or support you throughout your college journey?

In what ways did you remain connected to The Hidden Genius Project (staff, OAK2 Geniuses and new cohorts) over the years?

After finishing the program I volunteered as a Youth Educator for the summer session of Cohorts Oakland 3 (OAK3) and Oakland 4 (OAK4). I’ve also volunteered at various Catalyst programs and events such as Tech Slams and Brothers Code. Click HERE to watch Isaiah Martin’s interview with Fox 2 KTVU News at our Brothers Code event in 2019.

What was it like completing your senior year at Dartmouth?

Finishing my senior year was some hard work. I did it entirely remotely from home and had to learn new ways to adapt to an online education. In the end, I received a citation for meritorious performance in my Senior Design and Implementation, Computer Science class and trained a neural network to detect motivational quotes in books.

Now that you are a college graduate, what’s next for you?

I am now working full-time as a Software Engineer at Microsoft on the Azure Edge and Platform team. Last summer, I received a full-time Software Engineer offer from Uber after completing their Uber Career Prep Program internship. I still had some weeks in the recruiting process and applied to various companies. I got in touch with Microsoft via their university recruiter for Dartmouth. After a first round interview of 40 minutes and then a 4-hour, 4 interview segment final round, I received a competing offer from Microsoft. I ended up choosing Microsoft over Uber because the position was in Sunnyvale, CA which is rare because most Microsoft positions are in Redmond, Washington. I also enjoyed my interviews with the team and figured Microsoft would be a more secure and stable starting point for me than the younger Uber. The recruiting process for most big tech companies happens in the fall, so most new-grads know if they will be working there by the end of the fall season. In this position, I hope to learn from the seasoned engineers on my team and hone my skills as a professional software engineer.

Do you have any words of wisdom for Geniuses who will be starting college this fall?

Since 2012, more than 7,600 students have revealed their genius through our Immersion, Catalyst, and Community Partner Programs, and so many more are waiting to shine.