Brandon Nicholson, founding executive director of The Hidden Genius Project, remembers the days of riding with his best friend, Geary Johnson, through Oakland. His buddy’s car was probably optimized to fit 17-inch rims, 19 inches at most. But his friend put some 22s on it. So riding in that car was bouncy.

Those memories surfaced for Nicholson — who makes it clear he is a Pre-DTS fan of Formula One, meaning he followed the sport before the Netflix series “Drive To Survive” — this spring with the start of the new F1 season. The debut of the latest modifications surfaced a phenomenon called porpoising, which is what people in F1 called the bouncing the new cars were doing.

“I didn’t know what that was years ago,” Nicholson said with a smile. “Like, you are not supposed to put these wheels on a Honda Accord. So we were porpoising at 85 miles an hour.” 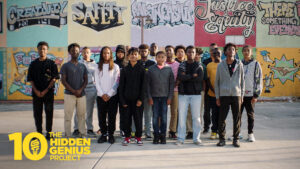 Because of Nicholson, a luxury car company from the suburbs of London, and a software company from Bellevue, Wash., some young men from Oakland will learn that porpoising is a byproduct of using the floor of the car to generate downforce, instead of the top, through what is called ground-effect aerodynamics. The downforce pushes the car down, which blocks the flow of air underneath and lifts the car back up. When the air gets flowing again, the downforce pushes the car back down. The cycle repeats, hence, the bouncing — or porpoising.

At Sunday’s U.S. Grand Prix in Austin, Texas, McLaren Racing — one of the elite programs in racing — will put on for the Town, as they say. McLaren’s partner, Smartsheet, is donating the expensive real estate on the cars of Lando Norris and Daniel Ricciardo, two of the most popular drivers in the world. Smartsheet’s logo will be replaced by that of The Hidden Genius Project, a non-profit that started and is headquartered in Oakland.

McLaren will also be promoting The Hidden Genius Project on its digital platforms and embedding it throughout its race-week activities.

“It has to be authentic,” said Matt Dennington, McLaren Racing’s executive director of partnerships. “We want to bring The Hidden Genius Project into our team for the week and provide an unforgettable experience, but also for them to receive the support and awareness from the wider world that our platforms can help provide.”

We’re honored to power work that matters with our sponsorship of @McLarenF1. You can join the action! Donate to @hiddengeniuspro and empower more young Black men to pursue STEM careers: https://t.co/WuLBxfx72r

Also, Wednesday in Austin is Tech Slam, a one-day sports and technology exposure event for high school students. Hesten Parrish, a student at AIMS College Prep High in the Grand Lake neighborhood, will be joining them. Norris himself, who is insanely popular among fans under 25, will engage with the students at Tech Slam.

This is the second edition of Smartsheet’s Sponsor X program, in which they bequeath their sponsor spot to a non-profit. For the Melbourne Grand Prix back in April, the Australian STEM-based program Deadly Science was the beneficiary. For round two, The Hidden Genius Project gets the boom of exposure from this global product placement plug.

The Hidden Genius Project — of which the Warriors’ Andre Iguodala’s wife, Christina, is a board member — specializes in training and mentoring young Black males in areas of technology creation, entrepreneurship and leadership. A national non-profit with hubs also in Richmond, Los Angeles and Detroit, The Hidden Genius Project has collaborated with the NBA, the NFL and MLB, along with Google and countless other Silicon Valley companies. It now hits the global stage as Formula One returns to America.

“F1 is an amazing platform,” said Andrew Bennett, Smartsheet’s chief marketing officer. “It’s an amazing place to be. Huge, huge viewership and growing really fast. A global presence. And we’re a global company. But if we can show people what we stand for, it’s so much more powerful for us as a business. It really is about not just getting in front of people, but getting in front of people in a way that’s a lot more meaningful. And it’s good for us because it’s a deeper way to tell the world what we care about. … And specific to The Hidden Genius Project, you think about the work that they’re doing, at the same time it’s so good for business, right? I mean, the name is perfect, right? It is hidden genius. And as a business, why wouldn’t you want to take the opportunity to get some of these amazing, amazing young men on your team?”

Oakland, especially the inner city, is full of car enthusiasts. The tradition of sideshows is a celebration of horsepower and driving skills. A staple of the local culture is renovating old cars with beefed-up engines, custom mufflers and glistening paint. You can’t spend much time in Oakland without seeing box Chevys, revived Mustang Cougars, “Glasshouse” Impalas or Camaros with custom mufflers. An Oakland hip-hop collective dubbed itself Grand Nationxl, a nod to the classic Buick muscle car from the 80s.

But this is a new twist in the relationship between the Town and cars, one centered on the technology of Formula One and the opportunity of a lifetime.

McLaren, at its soul, is a racing company, founded in 1963 by Bruce McLaren. But its Formula One wing especially is a STEM company. The science and technology involved in racing, the precision and organization required — that’s where Smartsheet comes in, the software company specializing at helping companies manage workflow and track progress — gives a new definition to the concept of analytics in sports. So while The Hidden Genius Project is being exposed to a massive audience on a global stage, its students are also being exposed to an entirely new profession, one that might be captivating based on the culture they’re from, with a plethora of career opportunities. 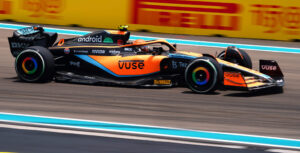 Lando Norris’ car at this year’s Miami race. The Smartsheet logo, which will give way to The Hidden Genius Project on Sunday, is toward the rear above the blue stripe. (John David Mercer / USA Today)

“McLaren has something like 850 some-odd employees,” Nicholson said. “And so when watching an F1 race, you’re watching a 90-minute math problem play out, and watching all these people who support those one or two drivers … watching them all come together for this greater thing and mobilize as people across the world. It is just tremendous.”

“On the face of our sport,” Dennington said, “you see the drivers, team principals and pit crew. But on top of this, our team has hundreds of talented people across many varied skills and responsibilities to get our race car on track. This includes mechanics, designers, engineers and machinists working in our race bays, and also many functions across operations and logistics.”

This is a vision-board moment for Nicholson. He was introduced to motorsports by his friend, Jordan Keyes, and his dad, Rusty. Rusty is an old West Oakland firefighter living in Vallejo. They are his “Black motorsports people” who took him to his first-ever drag race. They told him about Formula One, and how he needed to check out this “brotha named Lewis” — a reference to Mercedes driver Lewis Hamilton, one of the all-time greats. That led Nicholson to the Netflix show.

One thing he knows is the power of that one Black athlete to draw people to the sport. Like Thierry Henry drew him into Premier League soccer, and Tiger Woods drew him into golf. After diving into Formula One, he wanted that for his crew.

But this way into racing could be even more magnetic.

“Whether you’re someone who loves racing, and you want to really dig into this porpoising stuff,” Nicholson said, “Or you just really get your kicks trying to calculate whether you can take a pitstop or not. Or you’re the type of person who needs to build the type of team that can actually manage to get an entire racing setup across continents with no excuses. … We’re trying to take these opportunities to expose everybody to everything.”