Growing up in East Oakland, Hesten Parrish (Oakland Cohort 7 Alum) wanted to be part of The Hidden Genius Project from the time he wrote his first code in middle school. Being among the first group of Geniuses to experience our Immersion Program both in-person and remotely, Hesten learned how to adapt to extreme change with the support of his peers, and his ability to focus on school, himself, and The Hidden Genius Project increased. After recently attending the US Grand Prix in Austin, Texas to facilitate youth workshops at our first-ever Tech Slam F1 event with Smartsheet, 17-year-old Hesten plans to continue teaching young people the power of computer science while pursuing his dream of attending UC Berkeley as a computer science major and getting his pilot’s license. 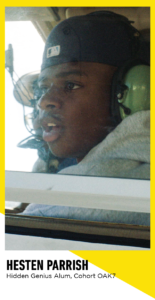 I first learned about The Hidden Genius Project when I was in middle school through another technology program I was in at David E. Glover Education and Technology Center (DEGETC) in East Oakland. During the summer, DEGETC shared a building with The Hidden Genius Project. One day I stumbled upon them learning to develop websites and I decided that I wanted to be in the Immersion Program as soon as possible.

My experience was very eye-opening and positive. I looked forward to attending the program during the weekdays in the summer because I knew I would have fun with my brothers while learning valuable skills. Finishing my final project was a challenge for me because I had trouble finding out what issue in my community I wanted to address. By speaking with my peers as well as self-reflecting, I was able to come up with my idea of Flag The Grade. In the program, you are given so many chances to display leadership skills, whether it is through presenting your application idea or mentoring your peers.

Being sequestered during the pandemic was very challenging, so having The Hidden Genius project continue its mission gave me something exciting to look forward to as I knew it would be fun work interacting with my brothers. The pandemic also allowed me to focus on school and myself more which was helpful. If I had to do it all over again, I would be happy to go through this experience in the program.

‘My application is called Flag The Grade. It is an app that aims to break the barrier of communication between the student and the teacher. My motivation for Flag The Grade stems from appalling statistics that show how many students’ voices go unheard due to different obstacles put in place. By adding a modern way of communication between the two parties the app cultivates better habits of relaying information and also creates a healthier educational environment.

The Hidden Genius Project has opened so many doors for me through the skills I’ve learned in the program, starting with my introduction to networking. When I joined the program I was under the impression that regardless of the mission statement we were only going to learn how to develop websites. I didn’t think that I would ever learn the core pillars of networking and then get actual practice in the networking field to showcase what I’ve learned.

In addition to networking, I’ve also developed my teamwork skills. When working on a team you quickly learn that everyone has their own ideas and opinions and sometimes it may be hard to collaborate, but being open to new ideas can show you perspectives that could prove beneficial. Speaking of being beneficial, The Hidden Genius Project provides you with the resources to teach yourself how to critically think and problem-solve using not only by coding but through their leadership and entrepreneurship sessions. All in all, I am very thankful for The Hidden Genius Project and the resources that I have been provided with. These resources are not wasted upon me and every chance I get to give back to my community I do.

The most important thing I gained from The Hidden Genius Project was networking and learning to collaborate with others. Being able to work with different people from various backgrounds is a very important skill to have. I can confidently say that The Hidden Genius Project has helped me with my networking skills and opened up the world of technology to me. Because of the program, I now have a deep understanding of web development.

If I didn’t have The Hidden Genius Project, I know I would still feel that coding is too intricate for me and that in order for me to learn I would have to take an expensive course. I now know that it is not as complex as you think you just need a good teacher.

Overall, you can tell that the staff here really care about you. They are always pushing students to go the extra mile because they see the potential in you. 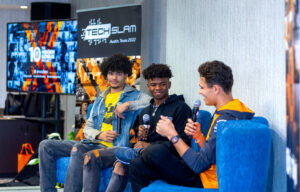 I have remained involved with The Hidden Genius Project through internship opportunities offered to me by the program. I was recently selected to be one of three Geniuses chosen to represent the organization in the Sponsor X collaboration with Smartsheet, which was truly an honor. I have never got a chance to fully share my story and journey with the world so when I learned that I was going to be having an amazing film crew following me around I was ecstatic. Working with Bo, Vanessa, and the rest of the film crew was a delightful experience — especially after being able to see the end product and how they were able to encapsulate the most important parts of my life into four minutes. 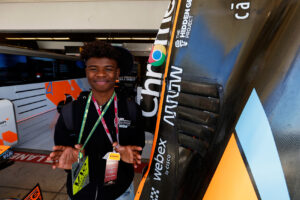 I also was granted the opportunity to travel to Austin, Texas to help support Tech Slam F1 as a Youth Educator. This was my first experience traveling with The Hidden Genius Project and it was unreal. I was glad to be chosen to give back to young students of color by showing them how technology could help open doors for them in the future. My real passion lies in helping others, especially youth of color. During the event, I was also granted the opportunity of a lifetime to interview THE Lando Norris (a famous F1 McLaren race car driver). I also had the chance to attend the first day of the United States Grand Prix as a Paddock Club member at the Circuit of the Americas, where I was able to not only watch the practice races but meet the official McLaren Racing team, including many more famous people that I could only dream of meeting. All in all, I feel truly blessed not only because of all the rewards I reaped, but all the people’s lives I was able to touch while I was in Austin, Texas.

Be prepared to work hard because you will thank yourself when you graduate from the program.

Take this opportunity for all that it is worth. If you invest your time here you will reach heights you never thought were possible.

Since 2012, nearly 8,500 students have revealed their genius through our Immersion, Catalyst, and Community Partner Programs, and so many more are waiting to shine.