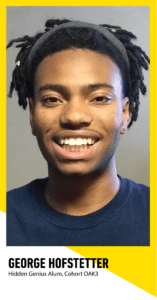 Project while attending the very first Hackathon for Black Male Achievement in Oakland. The Project had just started, but its early participants were already eager to spread the word. “A bunch of the guys were encouraging me to apply, but I was too young,” he says. At the following year’s Hackathon, George met Founding Executive Director Brandon Nicholson, who shared the same encouraging message. While the Hackathons were fun and enriching, George knew he wanted something more in-depth than the abbreviated, three-day experience that the Hackathons provided. Based on what George was learning via word-of-mouth, The Hidden Genius Project would provide the immersive engagement he was seeking in order to really develop fluency in coding.

Five years later, George is now an 18-year-old launching into his first year at Menlo College, where he’ll major in Business and Entrepreneurship on full scholarship, and simultaneously take computer science courses at Stanford University. George is also an entrepreneur; at sixteen, he launched his business, George Hofstetter Technologies, which combines social justice and technology, in hopes of helping other kids gain active roles in the tech industry.

His participation in The Hidden Genius Project provided George what he was seeking to propel him to where he is now—and then some! He developed the hard coding skills he was after, and also came out of the program with strengthened networking and leadership skills as well as invaluable connections. The holistic and immersive approach employed by the Project has helped him to soar over the past few years. He speaks to the power of what folks at The Hidden Genius Project refer to as “fishing.” “They’ll give you the foundation of something and then it’s up to you to seek more if it’s aligned with your interests,” he says. “They give you the steps, but you take control.” This approach guides Geniuses but also inspires them to take ownership over their own learning, a lesson that was not lost on George.

Alongside supporting Geniuses to take initiative for their own growth, the Project surrounds its participants with a strong community, formed by their peers, mentors, and staff, primarily made up of Black men. By allowing and encouraging a sense of brotherhood and cultivating an environment in which participants can see themselves reflected in the positive influences around them, The Hidden Genius Project nurtures a strong sense of self-worth and self-efficacy in Geniuses. In George’s words, “They encourage a lot of brotherly bonding—playfulness that brings young men together.” He also emphasizes the power of representation, which he describes as “so vital.” It “makes you see,” he says, “that if they’re doing this, there’s no reason I can’t do it too.” In his high school, he was one of three Black students in his entire class; perhaps it’s this contrast that helps George to see the value in the targeted approach of The Hidden Genius Project. Being surrounded by Black men allows for a tailored experience that George sees as important and beneficial. George says, “If you weren’t sure that you have a target on your back as a Black man in America, you leave [with that] understanding, which impacts the way you move in the world.” Some might perceive this statement as negative, but George believes he and his peers are much better off facing this fact, grounding themselves in positive community, and going out into the world as informed and active citizens.

Perhaps most importantly, the strong community connection doesn’t end when participants graduate from the program; rather, their role in the community transforms, as they become mentors and guides for their younger Hidden Genius Project brothers, paying forward what was instilled in them; and continue to receive guidance and support from staff and fellow alums alike. After graduation, George shares, “We’re not just strangers, and we don’t just go to the office for business.” Over this past summer, while preparing to begin his college journey, George was teaching computer science at the Richmond site, helping Genius Alum Zebreon Wallace and others. He sees this work as furthering the strong relationships he began while in the program. Of the younger Geniuses, he says, “That’s one of your brothers from a different cohort.”

He knows that he can also count on program staff to think of him through the same lens of unconditional, familial support. “I can call on them any time of day,” George shares, without hesitation. “If they don’t answer right away, it’ll be ten minutes.” This support, he says, is “just never-ending,” and is characteristic of the intensity and consistency of The Hidden Genius Project, two qualities that George says put this program in a league of its own. While he is blessed with his own sense of initiative and love for technology, The Hidden Genius Project has amplified his knowledge and success in this arena. In addition to supporting George to continue work on Cop Stop, an app addressing racialized police brutality that he had been working on prior to joining the program, the Project also provided him with connections to people and places like the Mayor of Oakland, Google, and Apple. Thanks in part to these links, George has now successfully gotten Cop Stop in the Apple App Store, a feat he may not have accomplished otherwise. He knows these connections will continue to be beneficial as he aspires higher and higher.