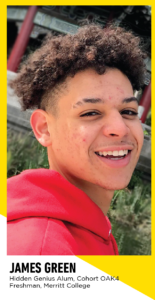 You can learn a lot about a person by their shoes — where they’re going and where they’ve been. Just two years ago, James had dropped out of high school, twice. Less than two months ago, he was flying on a private jet. “I didn’t have big dreams for myself. I was ready to not graduate high school and just be in Oakland my whole life.”

James says he hated school, noting that “people just didn’t know how to meet me where I was at, just telling me that I’m a distraction. You can’t do math in class if when you go home you have to watch your mother being hurt. If I said how I feel to my teachers, they’d tell me I threatened them. How can I want to learn from you when you see me as a threat?”

His path took a different course after getting involved with The Hidden Genius Project, and he attributes his experience during the Intensive Immersion program as giving him motivation and the ability to see what is possible. “The Hidden Genius Project got to know us before they tried to teach us anything. Before they tried to teach me how to code, they met with me to help me unpack my own trauma. They gave me the space to be a black man and to grow as a black man.”

He first heard about The Hidden Genius Project from his mom, and later learned more about it from his barber. “My barber said he had been taking his son to the Brothers Code events, and I was like, ‘okay, if my barber is recommending it, I should at least apply.’”

While he was skeptical at first, saying “I don’t know anything about coding, why would I go to a coding program?” he quickly learned during the Interview Day that the program offered much more than that. “I’d never been in a room with that many black men, and I wasn’t in trouble. Any time there are that many of us in a room, we’re usually getting suspended. It was just amazing.”

James was accepted to the program, but struggled with coding. “I was fighting the whole [first] summer I was there. I was trying to learn, but coding was not my thing.” The aspects of the program that interested James the most were the entrepreneurship and leadership training. “That was more valuable [to me] than coding — just networking and learning how to use what I have around me. It also made me realize that all the skills I needed were there with me the whole time.”

Once he realized he could tap into his newly formed network of Geniuses to complete the assignment of designing an app, he was quick to put his entrepreneurial skills to use. Prior to joining The Hidden Genius Project, James was running his own shoe restoration business, cleaning and customizing sneakers for friends. As his customer base grew, and he became overwhelmed with the demand, he applied what he learned in the program and created a solution: an online platform that connects sneaker restoration artists with customers. He hired a fellow Genius to code his vision for the shoe restoration app called “Fix My Kix,” freeing himself up to focus on developing his business plan. 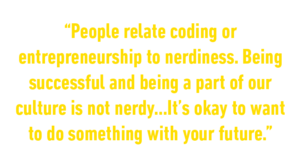 James graduated high school last month — 4 months ahead of his class — thanks in part, he says, to the support he received from The Hidden Genius Project staff during his independent study program. “It was weird not having to go to school every day, 8am to 3pm. I was like ‘I could do work right now, but I don’t have to.’ The Hidden Genius Project let me work in their office. They helped me out [during my independent study program] with time management, sitting me down and planning out my week and showing me how to schedule my time. They helped me to be assertive and to say ‘no’ so I don’t have hella things on my plate — because you can’t do everything, and that’s okay.”

Now a full time student at Merritt college, James continues to work on his app Fix my Kix, with plans to launch it through the apple store by 2019, and has already began promoting his brand on Instagram at @FixmyKixx. He offers the following advice to students who are thinking about joining The Hidden Genius Project: “Just do it. Give yourself this opportunity and be open-minded about it.” He also challenges his peers to look past the stigma associated with computer science. “A lot of times people relate coding or entrepreneurship to nerdiness. That’s just part of perception and media having control over it. Being successful and being a part of our culture is not nerdy. It’s okay to care. It’s okay to love. It’s okay to want to do something with your future.”

Since 2012, more than 3,100 students have revealed their genius through our
Intensive Immersion and Catalyst Programs, and so many more are waiting to shine.