By The Hidden Genius ProjectJanuary 28, 2019 No Comments

Before The Hidden Genius Project became a part of his reality, Galanafai Windross wasn’t sure what he’d pursue as a focus in college and beyond. 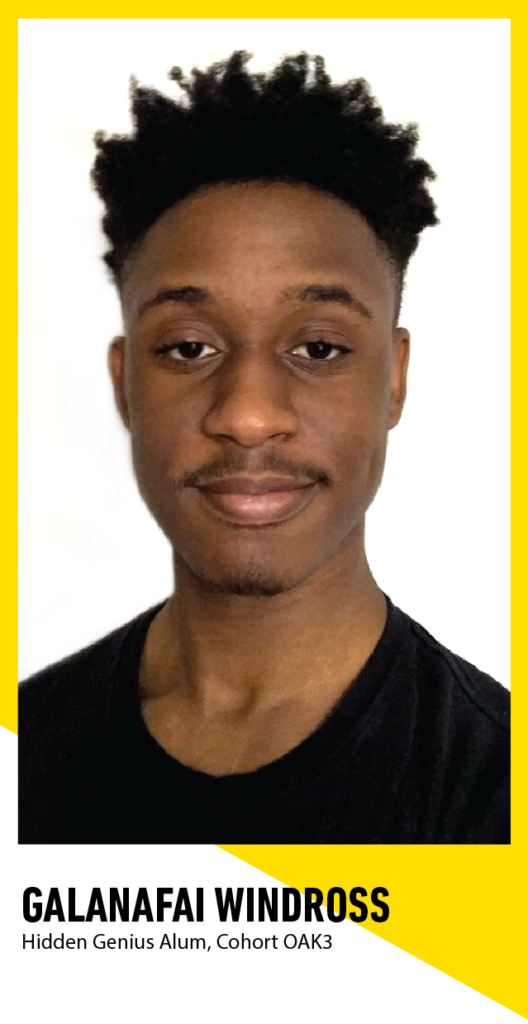 Participating in the Intensive Immersion program changed that. Now a college freshman majoring in computer science at San Diego State University, Galanafai says, “The Hidden Genius Project introduced me to computer science and gave me a strong skill base for programming. Because of this I decided to major in computer science in college and to have a career in the software development field.”

In addition to sharpening Galanafai’s focus relative to his studies and career path, The Hidden Genius Project also heightened his awareness about the world around him and his place in it. Both the intensive nature of the Immersion program and its specific focus contributed to this. “You’re there all the time over the summer,” says Galanafai. “You learn a lot more than other programs where you spend a couple of hours.” As a result of the combination of intensive time spent and intentional community built, Galanafai found himself establishing solid connections and enduring relationships with peers and mentors who have similar interests. What’s more, he found it powerful to be engaged in this process with all Black male staff and program participants. On this point, he says, “It’s good to see diversity, but it’s nice to see people that look like you.” Because The Hidden Genius Project programming is curated through the lens of Black men for young Black male participants, there’s an inherent opportunity for participants to gain a heightened sense of social awareness. On this note, Galanafai shares that previously he was less aware of social dynamics and issues, and that the program shaped the way he sees things today. “Now I’m woke,” he says.

Connecting with The Hidden Genius Project awakened Galanafai to more than hard skills and issues of social justice, though; it also expanded his imagination by providing new experiences and opportunities. He was able to teach coding and web page development to middle and elementary students from all around Oakland, putting him in the position to see himself as a leader, mentor, and educator. He had the chance to develop a social media app called Music Critic. “I put countless hours into making Music Critic functional,” he shares, “and when I finished it I was extremely proud of myself.”

His favorite memory from The Hidden Genius Project comes from his first visit to the Facebook campus. “Not only did we see the huge Facebook campus and the many technological innovations on the campus, we also were given a great seminar where we learned many things about how different teams of programmers collaborate.”

Thanks to these imagination-expanding activities, the same young man who just a few years ago had no clear sense of a path to pursue now carries a greater sense of clarity and vision. When prompted to imagine himself five to ten years from now, Galanafai says, “I see myself either starting a startup tech company or being a software engineer.”