By The Hidden Genius ProjectSeptember 29, 2019No Comments

When OAK4 Hidden Genius Alum Frizzell Devers stepped onto the Morehouse College Campus this year to begin his journey at the Atlanta HBCU, he 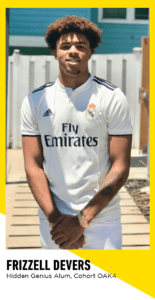 wasn’t alone. He joined fellow Hidden Genius Alumni Malik Poole (OAK3), and carried with him experiences learned from his time in the 15-month Intensive Immersion Program.

“In many ways [The Hidden Genius Project] prepared me to go to Morehouse. The simple fact that I had a bunch of African American brothers that wanted to do more for their community, but also wanted to do more for themselves…They wanted to start their own businesses and go into career fields [other than] entertainment or basketball…it was just a variety of people that had different aspirations. And that meant the world to me — to see a bunch of people just like me wanting to do more with their lives.”

Going into his sophomore at McClymonds High School Frizzell saw sports as his only pathway to college. “The only reason I played was because I thought I would have to play something in order to get into college. I didn’t have my heart in it. I just played because I was good at it, and it could get you somewhere,” he says. “When I joined The Hidden Genius Project I realized I didn’t need to play a sport to have colleges look at me.”

His decision to quit sports towards the end of his sophomore year and fully dedicate himself to the program has taken him farther than he imagined. Last year, Frizzell flew to London to lead workshops at The Hidden Genius Project’s first International Tech Slam. “It was my first time out of the country and only my second time on an airplane,” he shares. His first flight was also with The Hidden Genius Project when he attended their Tech Slam program in Los Angeles. 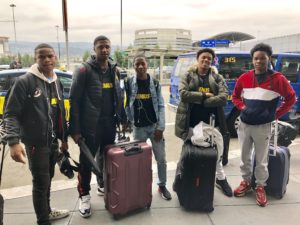 The trip to London expanded his view of the world, and the opportunities he saw for himself. “It was all new to me,” Frizzell reflects. “I was not ready for the accents, the culture, the climate, or the way the streets were set up. People driving on the opposite side of the street…I never thought I would be anywhere like that. [Before the program] I didn’t see any further than Oakland or the Bay Area. I’m starting to see there’s more to life…there’s traveling, meeting new people, making connections, and being able to enjoy yourself no matter what you’re doing.”

Over the next four years, Frizzell plans to apply to the Cinema, Television, & Emerging Media Studies (CTEMS) program at Morehouse College, with plans to pursue a career in film and acting. With new trajectory and a broader vision for his own future, he also sees big things for The Hidden Genius Project. “Who knows, maybe next they’ll take [Geniuses] to the moon.”

Since 2012, more than 5,200 students have revealed their genius through our
Intensive Immersion and Catalyst Programs, and so many more are waiting to shine.