In getting to know Devon Nutting, a 17-year-old senior at Oakland’s Skyline High School, it’s hard to imagine him on anything other than a bright path. 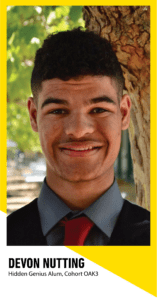 But he’s quick to highlight how The Hidden Genius Project has helped pave the way toward realizing his own visions and aspirations. As Devon puts it, “It was my participation in the program that really put things in perspective for me; I knew what I wanted to do before I went, but I didn’t know how I’d go about doing it, and it was this program that really made things clear on how I would begin to do it.”

So, what is it about the Project that’s left such an indelible impact on Devon? “I cannot stress and emphasize enough how impactful this program was on my life,” says Devon. “Outside of the technology, there was a lot of real-world implications and nuances that I picked up. It was a part of my maturity that really fostered into who I am today. Had I not been in the program, I don’t think I would’ve gotten that part or grown in that way.

By equipping participating youth with self-starting skills, The Hidden Genius Project supports them to navigate the field of technology in ways that are efficient and empowering. One of these skills is networking. ”In a field like technology, it is so vast and so big that you can never learn everything on your own,” says Devon. “It’s not what you know; it’s who you know.” The program imparts the wisdom that it’s both impossible and undesirable to achieve success and greatness when isolated. “I still try to embody [the spirit of networking] ] to the best of my ability today,” Devon says. “It’s such an invaluable skill that you really can’t be successful without.”

Another self-starting skill that youth gain from the Intensive Immersion Program is the ability to “Go Fish.” Hidden Genius staff teach participants that, while connections to others are crucial, reliance on others for answers poses significant limits to one’s ability to soar. “You really have to problem-solve on your own,” says Devon. “If you have a problem with technology, there are so many ways to find out on your own how to solve it.”

The Hidden Genius Project provided powerful and consistent examples of possibility and progress—examples Devon and his peers can see himself in. “It feels like a community of people that look like you,” Devon says, “and that’s a really beautiful thing.”  Through The Hidden Genius Project, young black male participants have the opportunity to learn from and be influenced by people with whom they identify, and who have had similar or relatable life experiences. In addition to the power this dynamic has in the program itself, Devon also sees the external, longer-term impact the Project is nurturing. “It’s people of color that don’t get these opportunities,” he says, “especially in the Bay Area and in Oakland. Technology is a really big field and I feel like the program is making very big moves to make a change in that field, and it’s a beautiful thing.”

Devon is now thriving in his busy and demanding final year of high school, enrolled in four advanced placement courses ranging from literature to statistics, and deeply engaged in the college enrollment process and all that comes along with it—school visits, applications, scholarship and financial aid proceedings. He has his eyes on University of California, Berkeley, as his first choice, and is also considering UCLA, UC Santa Cruz, and UC Irvine. His primary goal is to pursue a computer science degree, with the possibility of adding a business focus down the line.