By The Hidden Genius ProjectJuly 29, 2019No Comments

OAK4 Hidden Genius Alum Bryce Ashford has taken on many roles in his life. He participated in theatre all four years at Bishop O’Dowd high school, 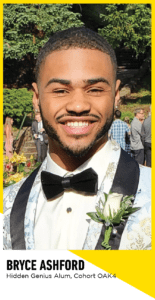 most recently portraying two characters in the production of Legally Blonde – a commitment that demanded up to three hours a day, five days a week for over three months of his senior year. His affinity for being in the spotlight made him a natural choice to shine as an MC at our End of Summer Celebration last year.

Auditioning for the role of a Hidden Genius wasn’t something he jumped at. Like many Geniuses that came before him, his decision followed a similar script: “My mom made me do it.” Still, his inner monologue took a dramatic twist the moment the program began. “It caught me by surprise in a good way,” he reflects. “I thought it would be a boring summer program. It was COMPLETELY different. All these different people that you would not really see come together, within 15 minutes we were all instantly friends.”

The bonds made during the program grew stronger over the course of the 15 months. “At school, your classmates become your friends,” says Bryce. “With The Hidden Genius Project, they are your brothers.”

When it came time to design his project during the Intensive Immersion Program, Bryce applied his interest in the entertainment industry. He recalls looking for local acting gigs online and not finding any roles for him, despite there being plenty of roles for caucasian actors. “I would search African American…age 16…17…18… and nothing would pop up.” He decided to design a platform he called “GET A LIFE” that promoted roles for people of color. “You could sign in, create a resume, choose a career like acting, singing or agent…everything would be connected.”

With a new mindset for how to create networking opportunities, he was also quick to take advantage of an opportunity that came his way. During his senior year of high school The Hidden Genius Project sent out an email to their student alumni encouraging them to apply for an editorial news internship. “As soon as I saw the email I was like ‘ooh, I need to take this.’” Shortly after graduating high school he became one of the youngest people to intern at CBS Interactive. “It catches everyone by surprise,” he says of his new colleagues at CBS. “They’re like ‘WOW, internship straight of highschool. Everyone gets a little surprised when they find out my age.” Check out his latest article that was published on CNET.

Since graduating from the Intensive Immersion Program, Bryce has continued to stay connected as a Youth Educator, supporting our Tech Slam event last year in Los Angeles and volunteering at our most recent Brother’s Code event in Oakland. While his aspiration to become an actor remains, he notes that The Hidden Genius Project opened his eyes to the most important role of all: himself. “The Hidden Genius Project understands what it’s like to be an African American male in society and has shown me how important it is to live my life the best way that I can while still being intact with my culture. Being fully me, not just showing up in a way others expect.”