Expansion and GrowthIn The News

Brandon Nicholson Is The Black Founder Transforming Lives Through Tech 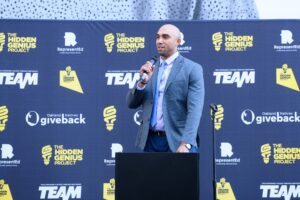 Founder of The Hidden Genius Project, Brandon Nicolson, is an advocate for the success of young Black boys. The Oakland-born native discovered his passion for achieving Black equity after graduating and has since worked to make this possible ever since.

In a recent interview, Nicholson explained that he felt compelled to launch the initiative after realizing the lack of access to opportunities Black boys had unless they were well connected.

“My parents were trained as lawyers and were very much involved in school policies, taking me to school board meetings and parent association meetings as they’re trying to advocate for more resources, so I got a lot of support,” Nicolson said.

Nicholson has openly credited his parents, wife, and professors for playing a part in his success and firmly believes that people cannot achieve success alone.

“I think my college leadership activities with organizations like Community House, Black Student union, Black Men’s Awareness Group, and others were instrumental in me learning how to ‘step up and step back,’ all while progressing towards a bolder common goal.”

Through friends, family, or mentors, Black youth need to have a community behind them to help them achieve true success – which is where The Hidden Genius Project comes in.

What Is The Hidden Genius Project?

The nonprofit organization is committed to building up the next generation of influential leaders through its training and mentorship programs. To date, the team has supported the professional journey of over 9,300 students and provided over 600,000 hours of direct training.

Inspired by his life experiences, Nicholson launched The Hidden Genius Project alongside five other Black male entrepreneurs to eradicate the obstacles against young Black boys.

Additionally, the organization has made mentorship and tech learning tools much more accessible to Black boys across California and Detroit.

Following a year of great success, Nicholson and his team will be stepping into 2023 in a brand-new building.

“We were once a small, fledgling organization without stable infrastructure, and so many other partners stepped up to take care of us and help us get to where we are today,” Nicholson said. “I’m especially excited for the partners that serve young people to be able to bring their participants to such a beautiful, accessible, and safe space, and hopefully, they will feel at home right away.”