By The Hidden Genius ProjectDecember 18, 2018 No Comments 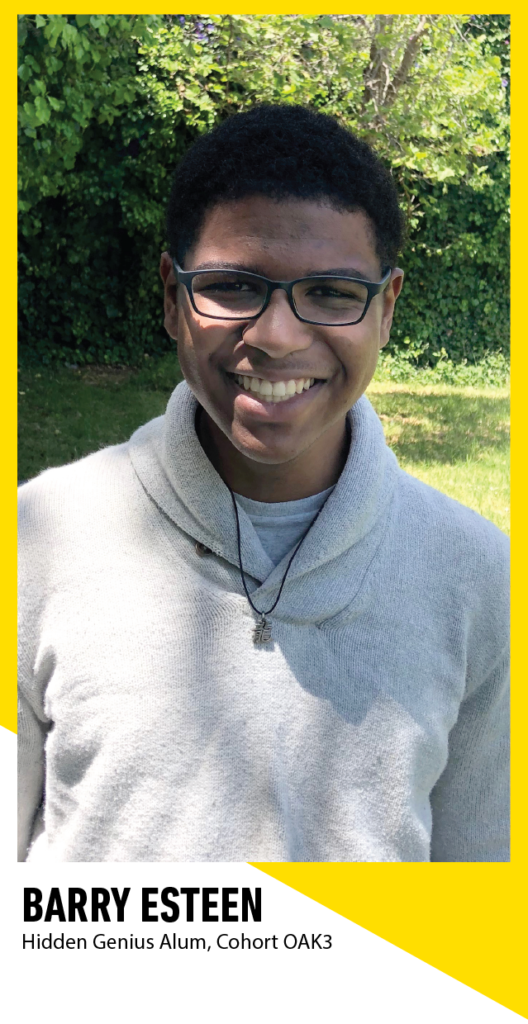 A self-proclaimed “nerd,” Barry Esteen says he never really fit in with other kids his age. Having attended three different middle schools, it was hard for him to connect with his peers. “I was really shy,” he shares. “You would rarely hear me speak. I wouldn’t really leave my house outside of school and would rarely come out of my room.”

At that time, he found comfort within the world of anime, where he felt a kinship with the characters. “I like the strong, silent type of characters, but I also like the loud, funny ones. You don’t expect them to do anything useful, but often times they are really funny and super strong.”

Things started to shift during Barry’s eighth grade year, when The Hidden Genius Project Executive Director Brandon Nicholson visited his classroom at Ile Omode School in Oakland. Brandon shared details about the Intensive Immersion program and piqued Barry’s interest. “I thought it was a cool program, so I went to check it out. The application was the next week and I was able to apply right away.” Barry was nervous about the interview process, but the nerves encouraged him to prepare himself, which ultimately paid off: he was accepted into the OAK3 Cohort.

When approaching the Intensive Immersion Program task of designing an app, Barry set out to create a video game that would provide players with an empathetic look into his own experience of feeling like an outsider. “The player starts off as me in middle school,” Barry explains. “You go through every day as me, and depending on what you do, it affects your popularity status and how you fit in. But [no matter what you do] the options never let you be the most popular kid.”

While Barry found a creative way to give voice to his perspective, his fellow Geniuses were also key in helping him step out of his own shoes and see himself. “Thanks to everybody being like, ‘Hey Barry, we know you like anime, but you might want to tone it down a bit,’ I was like, ‘You know, you’re right. [My fellow Geniuses] helped me feel more comfortable with myself and understand where it’s okay to nerd out.’ Before [The Hidden Genius Project] it was ‘Nerd out all the time,’ and after, it was like, “Okay, when I’m with my friends, it’s okay to nerd out—but in class maybe I shouldn’t be shouting out anime references.’”

Now a Senior at MetWest, an Oakland public high school that focuses on learning through mentorship, Barry is interning at Salesforce, gaining first-hand experience as part of their Sales Management team. He is working on his senior thesis project, Addressing Racism in Anime, with support from Hodari Tourè who is both his Senior Thesis Mentor and The Hidden Genius Project’s Sr. Innovation Educator and Curriculum Lead.

Barry says the most important thing he gained from his experience with The Hidden Genius Project was connecting with community. “I learned how to interact with people more. I was really quiet at the start…Toward the middle I was really loud. And toward the end I found a nice balance in between.” This balance, he says, is what allowed him to understand himself even more. While his fellow Geniuses offered feedback to how he might change things up, his mentors encouraged his uniqueness. “The mentors were like, ‘I like you because you’re not afraid to be yourself,’” says Barry. “I never felt like I was giving up a part of myself; I was just understanding myself and becoming a better version.”