By The Hidden Genius ProjectSeptember 30, 2022No Comments

Once Andrew Lubega (Oakland Cohort 8 Hidden Genius Alum) noticed his best friend was always busy during the summer and could clearly “see that he was working towards something great,” Andrew knew that he, “simply wanted to get busy too.” And that’s exactly what Andrew did once he joined our program in 2020.

Beyond learning how to program, soaking up entrepreneurial concepts, and understanding what it means to be a leader in a fully-remote environment, Andrew mentions how “The program felt like it was made for me. It stands out from other programs because it enabled young Black men such as myself to become empowered in the tech space. I feel at home, safe, and protected because it’s not just an organization, it’s a brotherhood.”

Now an 18-year-old freshman majoring in Computer Science at San Francisco State University, Andrew is determined to take his entrepreneurial projects to the next level with the support and guidance from The Hidden Genius Project. 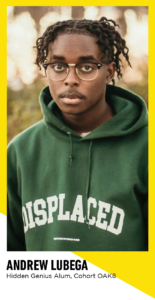 How have you been?

I’ve honestly been at a good point in my life. The flexibility and freedom of college has been extremely liberating. Although balancing school, life, and having fun is quite the task, I intend to keep moving forward as attending college is better than what I expected. I can’t wait to see where this experience leads me.

I’m also glad to be done working part-time at The Habit Burger Grill as a cashier. I’m currently applying for a part-time job out here in San Francisco, but I’m excited to see what I can make out of internship opportunities granted by The Hidden Genius Project’s Alumni Programs.

I found out about The Hidden Genius Project through Odera Nwosu (OAK7 Hidden Genius Alum), a friend who had gone through the program before my year. He always seemed so busy throughout the summer and I simply wanted to get busy too. I could see that he was working towards something great and once I knew computer science was at the root of it, I knew I was in for a ride. Initially, I believed that computer science wasn’t for me as I once dropped a class during the summer. However, I was mistaken. I simply didn’t have the right teacher, but The Hidden Genius Project had plenty of mentors for me to learn from.

It was completely virtual, but I enjoyed learning about web development and app design, including being able to network with other Geniuses and alumni in the program. Working with my brothers, building a bond, and being able to uplift one another were some of my main highlights within the program. In the program, I was provided with the proper resources to be successful. Whether it be a MacBook or a mouse, The Hidden Genius Project didn’t hold back in ensuring that we were geared up and prepared for success.

I know fixing errors was one of my biggest challenges throughout the program. It would always slow me down, especially when coding my app, Kicks For Nerds. There were numerous times I’ve faced seemingly unsolvable problems which I’ve pioneered my way through by restructuring my code, day-in-day-out, often for weeks. Sometimes this included fishing for solutions, asking for help, or doing research as more likely than not, someone else must’ve had the same problem. However, whenever the internet seemingly had no foreseeable solution, I would turn to my mentors or other alumni for help.

Along with the internship opportunities The Hidden Genius Project has provided with Autodesk, and CSSI (Google’s Computer Science Summer Institute) Working with my brothers, building a bond, and being able to uplift while leading each other stood as a big pillar within my highlights within the program.

During my time in the Immersion Program, I developed an app called Kicks For Nerds. It’s a shoe shopping app and social media platform created to promote your shoe game and bring sneakerheads together. It also acts as a platform to support shoe artists, shoe restorers & start-up brands. Although the idea may seem fun, the work was definitely taxing. However, I have no regrets as it is my passion project. I utilized flutter to develop the app making it compatible with both IOS & Android.

My favorite aspect of the project is most definitely its design. I have a knack for anything visual, but being able to code it true to design was absolutely enthralling. My least favorite aspect of the project would honestly be the backend code. Designing an app is one thing, but making it functional is a whole other challenge in itself. It’s taken me over a year to complete and I plan on making it a reality in the near future.

The program felt like it was made for me. It stands out from other programs because it enabled young Black men such as myself to become empowered in the tech space. I feel at home, safe, and protected because it’s not just an organization, it’s a brotherhood.

I would have to say that the top skills I’ve learned in The Hidden Genius Project is learning how to fish for solutions and problem-solving, marketing strategies, computer science fundamentals, and structural complex critical thinking.

Structural complex critical thinking was a skill I acquired through my experience working with Baba Eugene Lemon (Sr. Innovation Educator). Baba had often drilled into my cohort not only the fundamentals of code, but how to apply code in the bigger picture. He would often teach us how to code from a top-down design (breaking big ideas/problems into smaller projects/problems) and code from there. I was granted a birds-eye-view and often use the top-down design in everyday life.

Overall, Baba taught us that universally almost every language is the same, conceptually, the only difference being how it’s written. For every problem I’ve faced in the program, he would always refer me back to the fundamentals. Even now as a computer science major, I continue to reference this concept when I struggle with my code.

I gained a brotherhood. There simply isn’t more that I could ask from them. Despite being the oldest within my cohort, they gave me a place to belong and be a part of an uplifting experience for myself and many others. This experience provided me with a space to expand on my current interests in video and photo editing and music production by utilizing computer science.

My interest in computer science grew when I needed to expand my skills as an editor as it also allows for you to add code in their software through the form of expressions (JavaScript). And computer science enabled me to do just that, alongside understanding the importance of file organization which helped when layering tracks on the DAW (Digital Audio Workspace) Fruity Loops Studios

I would most likely not be a computer science major and probably would’ve done a full dive into my creative endeavors. I would likely commit to pursuing video/film editing within cinema and would’ve taken a fuller dive into music production.

The difference between when I initially started and where I’m now is that I didn’t know how to turn my skills into a source of profit or something I could pride myself on. Now I’m able to do just that with Computer Science and so much more. It’s enabled me to become competent within the tech space, and able to move freely as a leader within spaces where I’m a minority.

I worked over the summer as a Youth Educator within the Flutter course, teaching Geniuses how to build mobile apps. Not only that but I’ve also held office hours surrounding that—offering different types of support to help uplift them and complete their apps. Alongside helping me network with my brothers, this opportunity enabled me to work under a few alumni as a UX/UI designer for their projects.

In what ways has the staff of The Hidden Genius Project stayed and continued to support you since graduating from the program?

They’ve kept me tapped in with any and all opportunities available. Through The Hidden Genius Project, I was able to undergo an AutoDesk Apprenticeship revolving around 3-D CAD design. I also participated in Google’s Computer Science Summer Institute (CSSI). Both of these opportunities allowed me to develop my skills and expand my portfolio.

Tell your friends so they can join too.

Keep it pushing and don’t let your head down. The best motivation is consistency. Consistency builds motivation. Motivation builds passion.

Since 2012, nearly 8,400 students have revealed their genius through our Immersion, Catalyst, and Community Partner Programs, and so many more are waiting to shine.